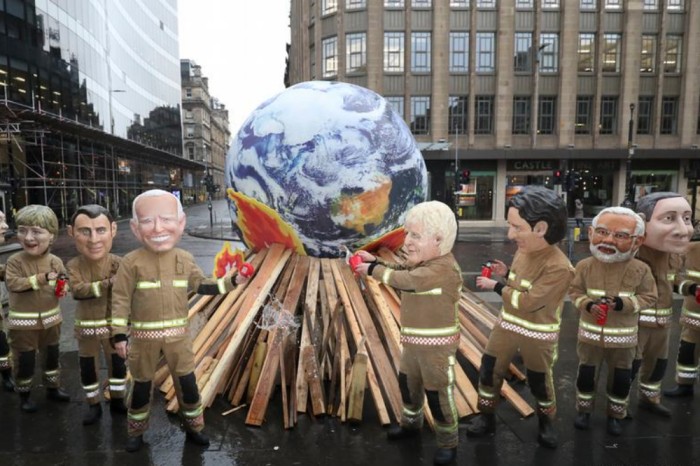 As businesses in the Scottish city of Glasgow were closing their doors at the end of business on Friday, negotiators at the COP26 climate talks saw their discussions go into overtime.

"I envisage formal plenary meetings in the afternoon to adopt decisions and close the session on Saturday," COP26 President Alok Sharma said in a message to delegates late Friday.

A revised draft of the agreement would be released Saturday morning to start the last round of talks, he added.

British Prime Minister Boris Johnson said through a spokesperson that he believes "an ambitious outcome is in sight."

Delegates from nearly 200 nations are working to keep alive goals set at a meeting in Paris in 2015 to limit global warming to 1.5 degrees Celsius (2.7 degrees Fahrenheit).

US climate envoy: 'Come together'

John Kerry, the US climate envoy, told reporters Friday, "It's going to finish sometime in the wee hours, maybe even into tomorrow."

He added, "It depends a lot on how quickly countries decide to really come together."

Sharma also suggested that Saturday might be the day a final deal is reached,

Kerry huddled with his EU counterpart Frans Timmermans and the leaders of imperiled South Pacific Island nations where survival is threatened by rising waters.

"For many of you it is not existential in the future, it is existential today," Kerry said. "People are dying today. All around the world, the impacts are being felt, today."

What is in the draft deal?

The draft deal, yet to be settled upon, requires nations to make harder pledges next year, considering current targets and what is actually needed to prevent an all-out climate catastrophe.

Current national emissions plans would lead to 2.7 degrees Celsius of heating, according to the UN, far higher than the goal set in the Paris accord.

In any case, the final deal in Glasgow will be the outcome of balancing the interests of the most climate-vulnerable nations like islands in the South Pacific, the world's most industrialized and wealthiest nations, and countries whose exports of fossil fuels are essential as an economic concern.

The latest draft notes that scientists say the world must cut carbon dioxide emissions by 45% from 2010 levels by 2030, and to net-zero by "around mid-century." Only then will Earth hit the 1.5-degree target, a way to benchmark future climate pledges.

Conflicts remain around carbon emissions, fossil fuel subsidies and how much support rich nations should lend poor nations most likely to face the dire consequences of climate change.