The world is already witnessing the use of cyber tools to compromise State security through, inter alia, attacking critical national infrastructure, including health and energy facilities.. 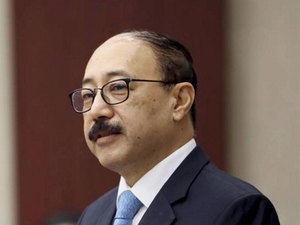 India said on Tuesday that some nations are "leveraging" their cyberspace infrastructure in order to accomplish broad spectrum of interests on fields like politics and security along with getting involved in contemporary forms of cross-border terrorism.

While addressing a UN Security Council meeting on "Maintenance of International Peace and Security: Cyber Security" virtually, Foreign Secretary Harsh Vardhan Shringla also emphasised on the fact that deployment of cyberspace is becoming an invincible weapon for the  terrorist outfits across the globe . They are expoliting the facility to disseminate their appeal, spread virulent propaganda, incite hatred and violence, recruit youth and raise funds.

"Some States are leveraging their expertise in cyberspace to achieve their political and security-related objectives and indulge in contemporary forms of cross-border terrorism,” he said.

He said the world is already witnessing the use of cyber tools to compromise State security through, inter alia, attacking critical national infrastructure, including health and energy facilities, even disrupting social harmony through radicalisation. Open societies have been particularly vulnerable to cyber-attacks and disinformation campaigns.

Shringla said while the meaning of peace has remained constant since the establishment of the Security Council, the nature of conflict and its underlying tools have transformed tremendously over the decades. "Today, we are witnessing growing security threats to Member States emanating from cyberspace, which can no longer be ignored," he added.

Shringla noted that the dynamic and continuously evolving feature of cyberspace has also brought cyber security into the discourse of peace and security. The borderless nature of cyberspace and more importantly anonymity of actors involved have challenged the traditionally accepted concepts of sovereignty, jurisdiction and privacy. These unique attributes of cyberspace present their own set of numerous challenges for Member States.

"We are witnessing a sophisticated use of cyberspace by terrorists around the world to broaden their appeal, spread virulent propaganda, incite hatred and violence, recruit youth and raise funds. Terrorists have also used social media for planning and executing their terror attacks and wreaking havoc," he said.

As a victim of terrorism, India has always underlined the need for Member States to address and tackle the implications of terrorist exploitation of the cyber domain more strategically, he said.

He emphasised that the integrity and security of ICT products, which form the building blocks of cyber space, are being compromised.

"There are widespread concerns that State and non-state actors are introducing vulnerabilities and harmful hidden functions, including through backdoor channels, into ICT networks and products. Such nefarious acts undermine trust and confidence in the global ICT supply chain, compromise security and could become a flashpoint between States.

"It is in the interest of the international community to ensure that all actors abide by their international obligations and commitments and not indulge in practices that could have potentially disruptive effects on global supply chains and trade in ICT products," he said.