Heavy rainfalls that pounded the Black Sea coastal provinces of Bartin, Kastamonu, Sinop and Samsun on Wednesday caused the flooding that demolished homes and bridges and swept away cars. 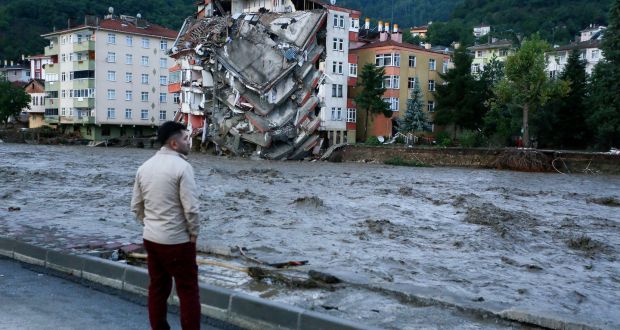 Search-and-rescue crews in northern Turkey recovered 10 more bodies overnight, raising the death toll from the severe floods and mudslides that struck the region to 27, officials said on Friday.

Heavy rainfalls that pounded the Black Sea coastal provinces of Bartin, Kastamonu, Sinop and Samsun on Wednesday caused the flooding that demolished homes and bridges and swept away cars. More than 1,700 people were evacuated, including hundreds who were lifted to safety by helicopters, and many were being temporarily housed at student dormitories.

The Disaster and Emergency Management Presidency, or AFAD, said Friday that the latest bodies were found in worst-hit Kastamonu.

The agency said crews are still searching for a woman who was reported missing in Bartin province. The private DHA news agency reported, however, that 12-year-old twins and their grandparents are also missing in the town of Bozkurt, in Kastamonu, after their building collapsed. Floodwaters inundated much of the town and a second building was also severely damaged.

In Bartin province, at least 13 people were injured when a section of a bridge caved in.

In total, five bridges collapsed in the floods while two others were damaged, AFAD said. Dozens of villages are still without power and several roads remain blocked.

Speaking in Bozkurt late Thursday, Interior Minister Suleyman Soylu described the scenes as “the most severe flood disaster I have seen.” President Recep Tayyip Erdogan, who canceled celebrations marking his ruling party's 20th anniversary, was scheduled to travel to the area.

Erdogan said Thursday that at least 4,500 personnel, 19 helicopters and 24 boats were involved in the search-and-rescue operation.

The disaster struck as firefighters in southwest Turkey worked to extinguish a wildfire in Mugla province, an area popular with tourists that runs along the Aegean Sea. The blaze, which was brought under control on Thursday, was one of more than 200 wildfires in Turkey since July 28. At least eight people died and thousands of residents have had to flee.

Climate scientists say there is little doubt that climate change from the burning of coal, oil and natural gas is driving more extreme events, such as heat waves, droughts, wildfires, floods and storms. Such calamities are expected to happen more frequently as the planet warms.