In Bangladesh, Protest Against PM Modi On Hold, Only Until He Pays A Visit

The communists, the Islamist group Hefazat-e-Islam and sections of students had held a series of protests in Dhaka and other Bangladeshi cities this month to express displeasure with the BJP-led government in India in the wake of the Delhi riots. 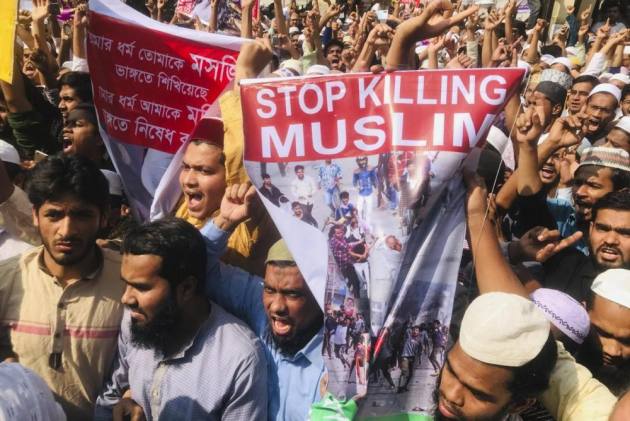 The anti-Indian protests planned during Narendra Modi’s visit to Dhaka has now been put on hold in view of the former's deferred trip to Bangladesh. But his Bangladeshi detractors claim they will be out in the streets in numbers whenever the Indian prime minister touches down in their country.

“Our protests have been held back, they have not been called off,” says Kafi Ratan, member of the Bangladesh Communist Party’s presidium. “We will take to the streets in large numbers to protest whenever he comes to Dhaka,” he adds.

The communists, the Islamist group Hefazat-e-Islam and sections of students had held a series of protests in Dhaka and other Bangladeshi cities this month to express displeasure with the BJP-led government in India in the wake of the Delhi riots.

They had plans of holding a series of protests next week but decided to hold them back since the Indian Prime Minister’s scheduled two-day visit to Dhaka from March 17 had been deferred because of the coronavirus outbreak.

Modi was to participate in Bangladesh’s founding father Sheikh Mujibur Rahman’s centennial and hold bilateral meetings with his host, Prime Minister Sheikh Hasina. A fresh date for his visit to Dhaka will be announced later at the convenience of both leaders.

During his 2015 visit to Dhaka, the Indian Prime Minister was given a very warm welcome. He and Sheikh Hasina have met several times in the intervening period and both enjoy an extremely warm and cordial relations.

So how does one explain the anti-Modi street agitations in Bangladesh?

Despite the claim of the communist party members to come out in numbers to protest against Modi, it is highly unlikely that the Sheikh Hasina government will allow street agitations during the Indian Prime Minister’s visit. The protests held in Dhaka in the wake of the Delhi riot do not necessarily mean they could have been held at a time when Modi was in Bangladesh.

Since the main opposition, the Bangladesh Nationalist Party (BNP), had also distanced itself from holding any such demosntration during Modi’s visit to Dhaka, therefore, even if some sections were keen to hold such protests, they would have been easily marginalised by the Hasina government.

But resentment and frustration had been rising against India in sections in Bangladesh. They stemmed mainly from pending issues like sharing water of the Teesta and other rivers that run between the two countries, the border killings as well as frequent reports of attacks on Muslims in India. The recent Delhi riot was perhaps the tipping point for a number of street demonstrations against India in Bangladesh.

But the main grouse against Delhi seems to be over Bangladesh being the target of attack in the ruling party BJP’s political rhetoric.

“The atmosphere for India is not very conducive in the Bangladeshi society,” says Saheb Enam Khan, a professor of international relations at the Jahangirnagar University in Dhaka referring to the widespread resentment.

Khan is of the view that the Indian Prime Minister should be welcomed to Dhaka. “But when he comes, he should give a categoric assurance that the anti-Bangladesh tirade that comes out of India at regular intervals should stop for good.”

He points out that while India claims Bangladesh to be a close friend, it does not stop from clubbing it Pakistan and Afghanistan as countries that indulge in religious persecution of its minorities. At a time when Bangladesh is playing host to over a million Rohingya refugees, such remarks by the Indian leadership look completely untrue and as something being deliberately said to malign Bangladesh, says Khan.

Similar views are also expressed by the BNP leaders who are keen to build good relations with Delhi. “We want PM Modi to clarify what he wants to do with those people who have been identified as illegal immigrants from Bangladesh are kept in camps in India,” former minister and BNP foreign affairs committee head Amir Khusro Chaudhary said.

He also stressed that while the BNP leadership too is keen on developing good relations with India, it is totally confused as to what Delhi wants to achieve by the anti-Bangladeshi remarks that senior BJP leaders making in their public speeches.

India-Bangladesh relations have shown a significant improvement since Sheikh Hasina came to power in Dhaka in 2009. But she was disappointed with the Manmohan Singh-led UPA government for its failure to sign the Teesta River Water treaty—a highly emotive issue in Bangladesh.

Though even under Modi’s BJP government that treaty has remained elusive, the two sides have managed to expand and deepen their cooperation in a number of areas from which both sides benefit. The marked improvement in Indo-Bangladesh relations is also a high-point in Modi’s “ neighbourhood first” policy. But domestic developments in India, especially legislations like the Citizens’ Amendment Act (CAA) and the proposed National Register for Citizens have brought the focus squarely on illegal immigration into the country from Bangladesh. Additionally, BJP leaders frequent attempt to club Bangladesh with Pakistan where Hindus are being persecuted has deeply hurt the Bangladeshi sentiment, putting PM Hasina in an awkward position as questions are raised on growing Indo-Bangladesh ties.

PM Modi has often assured the Bangladesh leadership that NRC and the CAA are internal affairs of India that will not affect Bangladesh. But the sporadic anti-Bangladeshi criticism, often terming the illegal immigrant from across the border as “termites” have raised doubts in Dhaka as the kind of relation that is on offer from Delhi.

“We are not slaves who can be abused by India whenever it wants,” says political commentator and Dhaka University professor Asif Nazrul.

For some like him, the anger against the Hasina government has also merged with that against India. “Sheikh Hasina may be indebted to India for its support and keeping her in power. But there is a growing resentment in Dhaka against her and the Modi government for its anti-Bangladeshi policies,” he adds.

Indications suggest that in the coming days the anger, especially over the Delhi riot and perceived anti-Muslim policies of the Modi government, might not be as strong as they are now among many in Bangladesh. But whenever the Indian Prime Minister visits Dhaka, he will have to reassure his hosts that India will not pursue any policy that will jeopardise the strong Indo-Bangladesh relations that have so far, benefitted both countries immensely.