Donald Trump Will Not Participate In Impeachment Hearing: US President's Lawyer

The US President's counsel complains there is a lack of 'fair process'. 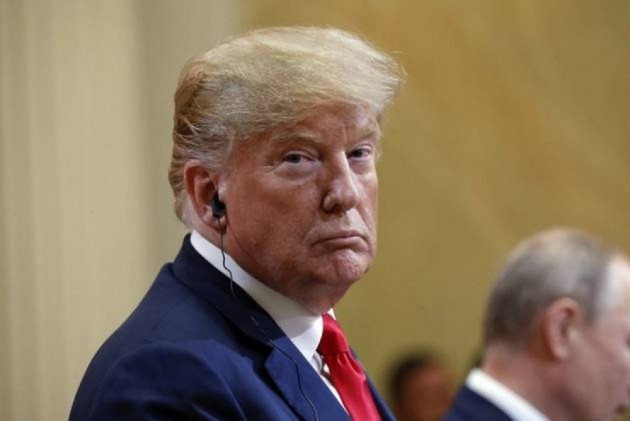 Donald Trump and his attorney will not take part in the impeachment hearing against the US President on Wednesday, his lawyer said, citing complete lack of "basic due process and fundamental fairness."

The impeachment hearings are an effort by the Democrats to establish whether Trump withheld US military aid to Ukraine to pressure the Central Asian country's President Volodymyr Zelensky into announcing a corruption inquiry into Joe Biden, Trump's leading Democratic Party rival in the US presidential poll in 2020.

The Democrats are alleging that Trump's call with his Ukrainian counterpart was irregular and inappropriate and an abuse of his office for political gain.

In a letter to Jerrold Nadler, Chairman of the Judiciary Committee of the US House of Representatives, dated December 1, Pat Cipollone accused him of "purposely" scheduling the initial hearing at this time as Trump would be out of the country.

"You scheduled this initial hearing-no doubt purposely-during the time that you know the President will be out of the country attending the NATO Leaders Meeting in London," Trump's lawyer said in the letter.

"As you know, this baseless and highly partisan inquiry violates all past historical precedent, basic due process rights, and fundamental fairness," it said.

The letter stated that the Judiciary Committee has afforded the President no scheduling input, no meaningful information, and so little time to prepare that "you have effectively denied the Administration a fair opportunity to participate."

"We cannot fairly be expected to participate in a hearing while the witnesses are yet to be named and while it remains unclear whether the Judiciary Committee will afford the President a fair process through additional hearings," it said.

Cipollone also noted that the initial hearing into the president's impeachment will include "no fact witnesses" at all.

"We understand from rumours and press reports (though not from any notice provided in your letter or in the official notice of the hearing) that the hearing will consist of an academic discussion by law professors. We understand this to mean that your initial hearing will include no fact witnesses at all," he said.

The letter, citing press reports, pointed out that the identities of these witnesses, apparently all academics, have not even been provided to other Democrats on the Judiciary Committee.

These reports also indicate that the Judiciary Committee currently intend to call three academic witnesses, but will allow Republicans to call only one such witness.

"Worse, while providing no information, you have demanded a response from the President. Your letter does not even attempt to explain the reason for this," it noted.

Cipollone said that President Trump can consider participating in future Judiciary Committee proceedings if it is serious about conducting a fair process of going forward.

"It is too late to cure the profound procedural deficiencies that have tainted this entire inquiry. Nevertheless, if you are serious about conducting a fair process going forward, and in order to protect the rights and privileges of the President, we may consider participating in future Judiciary Committee proceedings if you afford the Administration the ability to do so meaningfully," he said.

"As you have acknowledged, the House's "power of impeachment ... demands a rigorous level of due process," and in this context "due process mean[s] ... the right to confront witnesses against you, to call your own witnesses, and to have the assistance of counsel." So far, all of these rights have been violated. Even at this late date, it is not yet clear whether you will afford the President at least these basic, fundamental rights or continue to deny them," the letter said.

Meanwhile, the US' House Congressional committee will review the investigation report of Trump's impeachment inquiry on Monday setting the stage for charges to be filed.

The House Select Committee on intelligence, who held a series of hearings in both public and closed door settings over the past few weeks, would begin deliberations on its report on Monday.

The committee is expected to consider and vote the report on Tuesday evening, which would then head to the House Intelligence Committee for it to frame impeachment charges.

"This is a major event, moving impeachment proceedings one step closer to a possible impeachment trial in the Senate," The Hill reported Sunday.

If Trump is impeached, he will be only the third such president in American history.

"Today is the first day of a month that could define the Trump presidency. And we're heading into a critical week, as the impeachment inquiry moves into a new phase," CNN reported.

President Trump has described the impeachment proceedings as a hoax and has asserted that he has done no wrong.