Trump's Decision To Freeze WHO Funding Nothing Unusual, Another Attempt To Divert Attention From Covid-19 Criticism

The American President has been showing signs of growing nervousness in the face of widespread criticism on the COVID-19 issue in an election year. 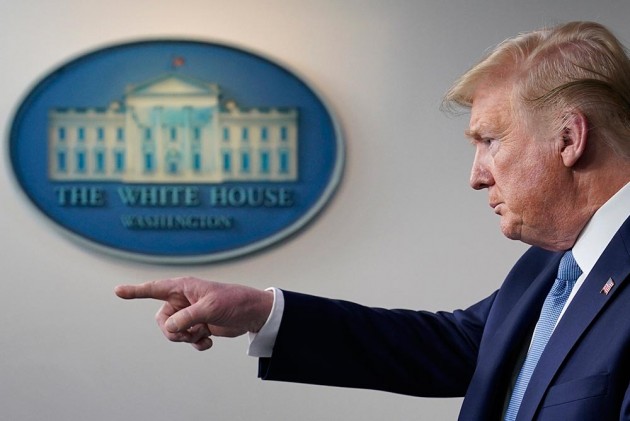 US President Donald Trump announced Tuesday that funding to the World Health Organisation (WHO) would be put on hold for at least 60 days, accusing the organisation of “mismanaging and covering up the spread of the coronavirus.”

Trump may have caused global outrage by threatening to freeze WHO’s funding, but a few months “hold up” in members’ contribution is nothing unusual for this international public health body.

Richard Horton, editor in chief of The Lancet medical journal, condemned Trump’s decision as a “crime against humanity.”

But diplomats familiar with the working of the United Nations (UN) and its various bodies point out that “two to three months ‘hold ups’ are not new.” Many countries pay their contribution towards the end of the year. For instance, only 75-odd countries out of a total of 195 have paid their annual contribution to the UN for 2020 so far. Perhaps, the same may also be true for the WHO, they say.

According to them, such a delay in payment is “temporary liquidity issues of cash flow” that are usually made up by deft fiscal management without impacting programme implementation.”

But Horton exhorted, “Every scientist, every health worker, every citizen must resist and rebel against this appalling betrayal of global solidarity.”

Bill Gates also lent his voice to the growing protest. “Halting funding for the WHO during a world health crisis is as dangerous as it sounds,” he said, adding, “Their work is slowing the spread of COVID-19 and if that work is stopped no other organisation can replace them.”

However, some diplomats explained that Trump’s threat amounted to a “hold” and there would be no immediate impact. Moreover, much of the fund that he referred to is not “assessed contribution” but “voluntary contribution”, which is extra money linked to specific projects. So, a lot will depend on specific projects the funds were meant for.

The threat to freeze American funding to the WHO is seen by many as yet another attempt by Trump to divert focus from the rising criticism of his handling of the ongoing pandemic.

The American President has been showing signs of growing nervousness in the face of widespread criticism on the COVID-19 issue in an election year.

Trump is seeking a re-election at a time when the pandemic is threatening to ravage the country. There have been 6,16, 168 infections and more than 28,000 deaths so far in the US. Doctors have warned that the death toll could go up to two million people, if the country does not take the virus seriously and follow the guidelines of social distancing and isolation.

The beleaguered President has sacked several public officials in the past weeks. Over the weekend, he retweeted the demand to fire Dr Anthony Fauci, who said fewer people would have died if the Trump administration had announced isolation measures earlier.

Dr Fauci is the government’s top infectious diseases’ doctor, who has outlived six presidential administrations so far and led the country’s fight against the Aids, Zika and Ebola epidemics.

Trump had earlier directed his attack against China, calling the disease ‘the China virus.’ Although, he stopped calling it so after a telephone conversation with Chinese President Xi Jinping and receiving 1,000 ventilators from China to tide over a crisis in New York City last week.

Interestingly, his attack on the WHO is because of its delay in declaring the coronavirus outbreak as a pandemic, allegedly on China’s insistence. This, according to Trump, had caught his administration unaware to deal with the galloping spread of COVID-19 across the US and elsewhere in the world.

But reports suggest that global health workers have been satisfied with the WHO, its “transparency”, as well as the “speed” with which it responded to the coronavirus under its director general, Tedros Adhanom Ghebreysus. It is by now widely acknowledged that the global health body has been much more effective and quicker in its response to the current pandemic than it was in 2014, during the Ebola outbreak, three years before Tedros took over.

“If the United States had followed the WHO’s very clear advice on identifying cases, isolating cases and conducting contact tracing, then it wouldn’t be in the appalling situation that it is today,” Gavin Yamey, director of Duke University’s Centre for Policy Impact in Global Health, was quoted as saying by the media.

But the WHO has also been accused of not asking for a travel ban to and from China. However, legal experts have argued that under international law, the Organisation cannot generally call for travel bans as they can be counterproductive and force countries to withhold vital information for fear of economic isolation.

“To blame the WHO for acting on the basis of international law and science, in ways that are entirely consistent with what WHO practices have been for decades, is the height of hypocrisy,” a legal expert was quoted as saying.

Trump had claimed that his travel ban had shut down international transmission of the virus. But reports reveal that between December and March, over 3,200 flights operated from China to the US.

However, according to most experts, the WHO’s twin problem is “low” budget and the lack of power to “redress” against governments. It is a relatively toothless structure and unlike the UN’s other bodies, like the Atomic Energy Agency, it cannot enforce anything. The WHO operates in countries at the pleasure and permissions of the host countries. Therefore, allowing entry into a country is more of a negotiation than an obligation of the host nation.

India is among the countries that have demanded a thorough reform of the WHO, which has remained an organisation of the last century, unable to be effectively deal with the current challenges. The Covid-19 pandemic may soon bring countries together to bring about the much-needed reforms and changes in this important public health body’s structure and mandate.