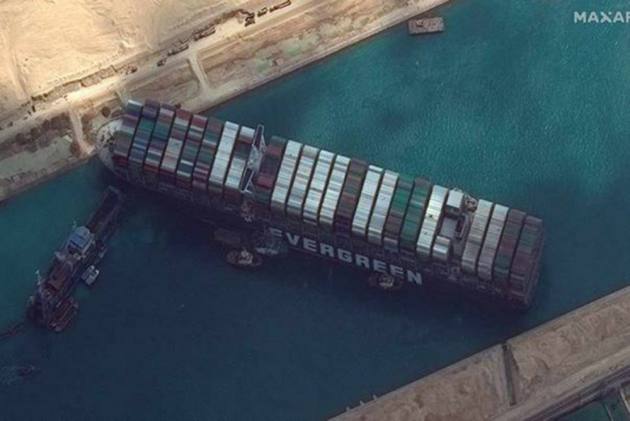 Amid a giant container ship remaining stuck sideways in Egypt's Suez Canal for the sixth day on Sunday, authorities have made new attempts to free the vessel and reopen a crucial waterway whose blockage is disrupting global shipping and trade.

The massive Ever Given, a Panama-flagged ship that carries cargo between Asia and Europe, got stuck in a single-lane stretch of the canal, about six kilometers (3.7 miles) north of the southern entrance, near the city of Suez.

Meanwhile, Peter Berdowski, CEO of Boskalis, the salvage firm hired to extract the Ever Given, said the company hoped to pull the container ship free within days using a combination of heavy tugboats, dredging and high tides.

Egypt Prime Minister Mustafa Madbouly called the ship's predicament "a very extraordinary incident,” in his first public comments on the blockage in a press conference in Cairo.
In the backdrop of these developments, a maritime traffic jam grew to around 280 vessels near Port Said on the Mediterranean Sea, Port Suez on the Red Sea and in the canal system on Egypt's Great Bitter Lake, according to canal service provider Leth Agencies.

Some vessels began changing course and dozens of ships were still en route to the waterway, according to the data firm Refinitiv.

A prolonged closure of the crucial waterway would cause delays in the global shipment chain. Some 19,000 vessels passed through the canal last year, according to official figures.

It still remains unclear how long the blockage will last.

Even after reopening the canal that links factories in Asia to consumers in Europe, the waiting containers are likely to arrive at busy ports, forcing them to face additional delays before offloading.

Apparently anticipating long delays, the owners of the stuck vessel diverted a sister ship, the Ever Greet, on a course around Africa instead, according to satellite data.

Others also are being diverted. The liquid natural gas carrier Pan Americas changed course in the mid-Atlantic, now aiming south to go around the southern tip of Africa, according to satellite data from MarineTraffic.com.

Meanwhile, reports have claimed that the Indian government has also held talks with all stakeholders to identify perishable cargo stuck due to the maritime jam and direct Indian businesses to take alternative routes to ensure the cargo reaches its destination.

According to reports the Union government has formulated a four-point plan to deal with the blockage situation.

Meanwhile, the head of the Suez Canal Authority said strong winds were “not the only cause” for the Ever Given running aground on Tuesday, appearing to push back against conflicting assessments offered by others. Lt. Gen. Osama Rabei told a news conference Saturday that an investigation was ongoing but did not rule out human or technical error.

Rabei said he remained hopeful that dredging could free the ship without having to resort to removing its cargo, but added that “we are in a difficult situation, it's a bad incident.”

Asked about when they expected to free the vessel and reopen the canal, he said: "I can't say because I do not know.”

Shoei Kisen, the company that owns the vessel, said it was considering removing containers if other refloating efforts failed.