Explainer | US President Joe Biden’s ‘Summit For Democracy’: All You Need To Know

US President Joe Biden on Thursday gathered over 100 global leaders to host the virtual 'Summit for Democracy', where he talked about the 'backward slide of democracy' and the perils of strengthening autocracy. 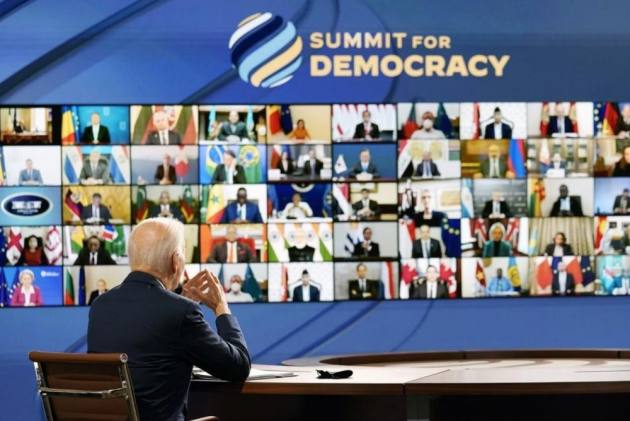 US President Joe Biden on Thursday hosted a virtual ‘Summit for Democracy’ that was attended by over 100 global leaders including Prime Minister Narendra Modi. The summit has been deemed one-of-kind to counter threats to democracy worldwide.

During the summit, Biden said that safeguarding the rights and freedom of people against the rise of authoritarianism has become a “defining challenge” and emphasised the threats faced by ‘global freedom’ under expanding autocrats.

Biden underscored that long-established democracies including the US, haven’t been immune to such strains calling the moment an “inflection point in history".

Here’s more of what Biden’ summit was all about:

1. Biden warned against the growing threats received by democracies from expanding authoritarian powers. He said that autocrats as leaders across the world are sowing doubts about the stability and durability of elected governments. "Democracy doesn't happen by accident. We have to renew it with each generation," he said adding, "And this is an urgent matter on all our parts, in my view, because the data we're seeing is largely pointing in the wrong direction."

2. However, Biden did not explicitly point fingers at Russia and China. Washington has locked horns with both the countries and the leaders of these nations were reportedly absent from the summit.

3. More than $420 million aid has been announced through programmes aimed at fighting corruption, supporting women and people from the marginalised group, working professionals, labour activists and bringing about reforms in the healthcare and education sectors.

4. US Treasury Secretary Janet Yellen discussed how her department is actively cracking down on money laundering, illicit finance and tax evasion. "After all, the United States cannot be a credible voice for free and fair government abroad if, at the same time, we allow the wealthy to break our laws with impunity,” she said.

5. Although the US officials promised a course of action following the summit, questions have been raised around the missing leaders from a certain number of countries.

6. The summit prompted anger from China following the invitation of Taiwan. China considers Taiwan -- the democratically ruled island -- part of its territory.

7. The presence of Brazil’s far-right leader Jair Bolsonaro raised eyebrows around the ‘democracy’ summit. Speaking to news website NPR, an official said that democracy was more than a single leader or a single party or a single moment in time, rather “entire societies".

8. On America’s democracy, Biden did not mention the January 6 attack on the US Capitol Hill. US Vice-President Kamala Harris took on the issue and said, "January 6th looms large in our collective conscience. And the anti-voter laws that many states have passed are part of an intentional effort to exclude Americans from participating in our democracy.”

9. Biden backed the stalled electoral reform bills, which have been filibustered by the Republicans in the Senate.

10. Measures were announced against foreign officials for their poor responses to Covid-19. Further measures, for alleged corrupt schemes, were issued against countries.