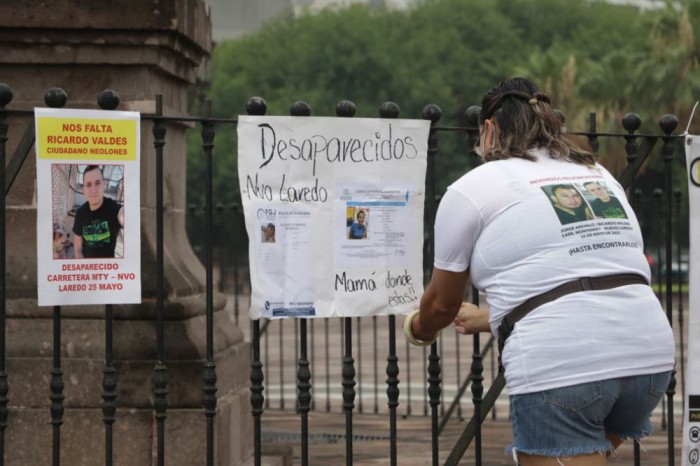 The location was discovered some weeks earlier and is being investigated within the context of dozens of reported disappearances along a segment of the highway connecting Nuevo Laredo and Monterrey since 2012, the National Search Commission said.

“The characteristics of the place allow the inference that it is an extermination site that has been used for years and until very recently, which will have to be confirmed by experts,” the commission's statement said. “This is the first site of these dimensions found in Nuevo Laredo.”

Drug cartels frequently use such sites to burn or dissolve the bodies of their victims.

Located across the border from Laredo, Texas, Nuevo Laredo has been dominated for years by the Northeast Cartel, a fragment of the old Zetas cartel.

The head of the government's National Search Commission, Karla Quintana, had told the W Radio station Tuesday that a “clandestine crematorium of considerable size” had been found just outside Nuevo Laredo, along with burned bone fragments. She said it had been set up and operated years ago, but had also recently been used.

Families of dozens of people who went missing on the highway between Monterrey and Nuevo Laredo this year expressed anger at the report, complaining that they had not been informed of the situation.

Angelica Orozco, who leads the relatives' group United Forces for Our Disappear in Nuevo Leon state, which borders Nuevo Laredo, said Wednesday that “it is very worrisome for us that the commission has come out with such alarmist statements without informing us.”

Her group said in a statement Tuesday that “these statements totally re-victimize, and cause anguish and torture for the relatives of the disappeared," because many may assume their loved ones may have been killed and burned there.

The commission's statement Wednesday night called for the inclusion of families of the missing in the efforts to investigate the site.

At least 71 people went missing earlier this year as they drove on the highway between the industrial hub of Monterrey and Nuevo Laredo. The victims include at least a half dozen U.S. residents.

Most of the missing are men who drove trucks or taxis on a road that local media have dubbed “the highway of death.” But the missing also include women and children and men driving private cars. Activists say about a half dozen men have reappeared alive and badly beaten after being abducted on the highway, and all they will say is that armed men forced them to stop on the highway and took their vehicles.

Quintana said earlier this year the disappearances may be related to turf battles between the Jalisco and Northeast cartels.

Raymundo Ramos, a human rights activist in Nuevo Laredo, said authorities have released little information about the discovery, but that in the past such sites have been found with large metal drums where bodies are soaked in diesel and burned beyond recognition.

“They should guarantee that (victim's) relatives have access to the information,” Ramos said of authorities.

Despite alerts from relatives of the missing in May, the state government of Nuevo Leon, where Monterrey is located, didn't warn people against traveling on the highway until almost a month later, activists say. Authorities have since increased policing and security on the highway. (AP)