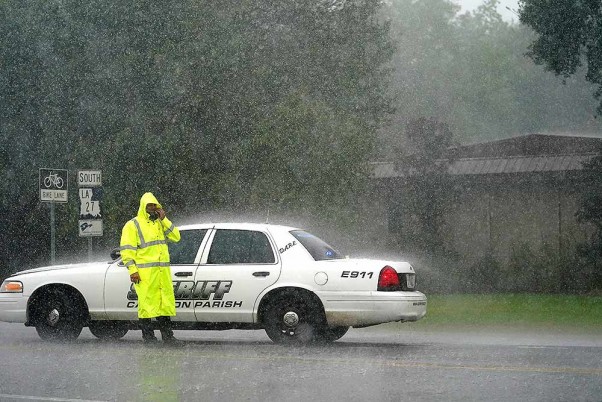 Hurricane Laura made landfall in southwestern Louisiana early Thursday after strengthening into an "extremely dangerous" Category 4 classification, with the US authorities warning of potentially catastrophic impacts.

It intensified rapidly into a Category 4 hurricane as it barreled toward the Louisiana and Texas coasts and was on the verge of becoming a Category 5, the most powerful classification, when it hit land.

Forecasters said even stronger winds were possible that could rip apart buildings, level trees and toss vehicles like toys.

Destructive storm surge and damaging winds will affect areas near the site of landfall.

Hurricane Laura is also an inland flood risk as far north and east as Arkansas and the Ohio and Tennessee valleys. Isolated tornadoes are also expected from Laura.

"As of right now, it looks like Houston will be spared from the major impacts and power outages. It could experience gusty, possibly tropical storm force, winds and stormy weather at times from the rainbands.

“Our eastern cities including Winnie, Liberty and Livingston could still experience damaging winds…,” according to the National Hurricane Center advisory.

In Texas, around 4,00,000 people in coastal areas of Galveston, Beaumont and Port Arthur have been placed under mandatory evacuation orders. Texas Governor Greg Abbott told reporters on Wednesday that those in Laura's path should leave if they haven't already done so.

"The power of hurricane Laura is unprecedented and Texans must take action now to get out of harm's way and protect themselves," Abbott said. "The State of Texas is prepared to respond to the storm, and we are working alongside federal and local officials to keep Texans safe."

The COVID-19 pandemic is complicating efforts to shelter evacuees safely. They are being directed to hotels instead of typically crowded shelters.

Despite warnings, some residents said they are going to stay behind and are taking measures to prepare their homes, using storm shutters and generators. Some were boarding their homes with plyboard all day.

The mayor of Lake Charles said he suspects the coronavirus pandemic and economic hardship are leading many people to take pause. People staying behind will likely have to wait hours for first responders to reach them.

Louisiana Governor John Bel Edwards said in a news conference, "The storm surge flooding is starting now in Louisiana, well ahead of the storm. It will just get worse over the next day or so."

More than 2,00,000 people in the Calcasieu and Cameron parishes of southwestern Louisiana were placed under a mandatory evacuation order.

"If you're in those low-lying areas, if your local officials have told you that there's an evacuation in place, whether it's mandatory or voluntary, we need you evacuating now," Edwards said.

Laura's storm surge is expected to reach levels not seen in Louisiana since Hurricane Audrey in 1957, he said.

According to the National Hurricane Center, “Laura is an "extremely dangerous" Category 4 hurricane, now with maximum sustained winds of near 240 kmph.”

The Center said storm surge - the rise in seawater caused by a storm - and tropical storm-force winds will arrive well in advance of the storm's center, and that "all preparations to protect life and property should be rushed to completion in the next few hours."

The National Hurricane Center said on Wednesday afternoon that if people delay evacuating, the roads could already be flooded.

The projected storm surge could cause the most life-threatening damage, the hurricane center said.

If the peak surge occurs during high tide, the water along Johnson Bayou to Rockefeller Wildlife Refuge on the Louisiana coast could rise between 15 and 20 feet. Other nearby areas could see storm surge as high as 15 feet.

Arun Kankani, President of Sewa International, said: “We are setting aside USD 10,000 as a first step to help with the response. We are working in close coordination with multiple groups to ensure that residents of the 59 counties in Texas and residents in Louisiana are taken care of”.

Rashmi Singh, Disaster Case Manager, said: “In the interest of families and the safety of our communities, Sewa International has been working closely with officials in multiple counties for preparedness and to alert the media with updates”.

The organisation has set up a helpline to help provide information and support round the clock.

“The helpline has been inundated with requests for help with evacuation and shelter to escape the hurricane from Galveston and other coastal areas. Sewa disaster response teams have begun disseminating the latest information through a variety of social media channels and via email,” Gitesh Desai, president of SEWA International Houston, told PTI.

“Sewa International has stood up ground response teams in cities and small towns across the Texas and Louisiana border, and based on our past experience with other disasters, we are already staged for a quick roll out of relief operations post-hurricane,” Swadesh Katoch, Vice President of Disaster Response, said.