While the video was indeed shot, fact-checkers have found that the video did not show a body or an execution being carried out by the Taliban but that the person hanging from the rope was a Taliban fighter himself. 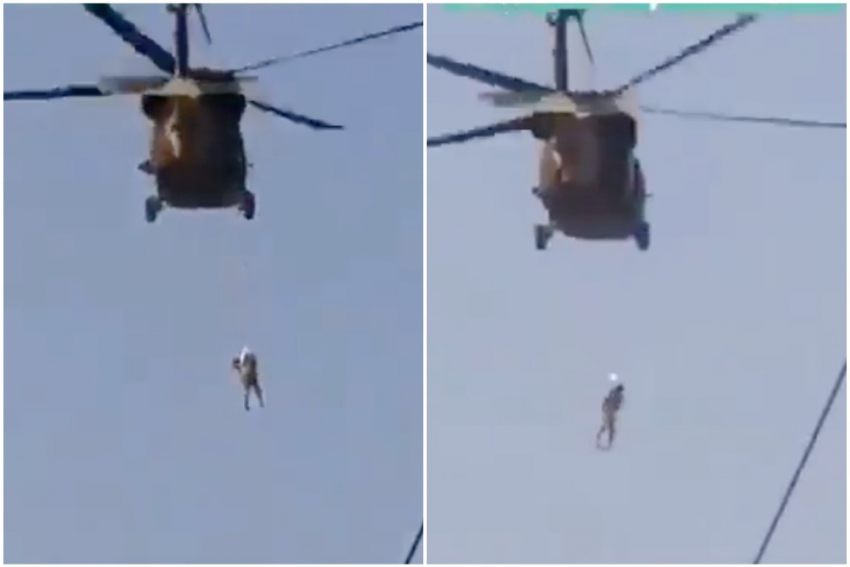 Hours after the United States military exited Afghanistan with the last of its evacuation planes leaving the war war-torn nation a day ahead of the August 31 deadline, videos of the Taliban purportedly flying a US helicopter with a body dangling from it went viral. However, later fact-checks have found the news to be fake.

While the video was indeed shot, fact-checkers have found that the video did not show a body or an execution being carried out by the Taliban but that the person hanging from the rope was a Taliban fighter himself.

The video, which purportedly showed an American helicopter that had been left behind by the US military and later taken over by the Taliban, was shared widely on social media on Tuesday.

Watch: Video Of Body Dangling From Chopper In Afghanistan Surfaces Hours After US Exit

Shared first by a Twitter account named 'Talib Times', the video showed the US chopper flying with what clearly looked like a body dangling from it.  "At this time, the Islamic Emirate's air force helicopters are flying over Kandahar city and patrolling the city," the description for the video read.

The video was shared widely by politicians and journalists including Texas senator Ted Cruz who slammed the Joe Biden government for its unplanned withdrawal from Afghanistan.

Did the Taliban dangle a dead body from a helicopter?

Fact-checkers soon found the news to be fake. The man dangling from the helicopter was not being publicly hanged but being lowered on top of the Kandahar governor's office to plant the Taliban flag.

Fact-checking platform Alt News found that the video actually showed a Taliban fighter being lowered onto the top of the Governor's building to fix a flag. It also showed the man to be alive and not hanging from a noose but a harness.

The same was also confirmed by Afghan journalist Bilal Sarwary who said that he was acquainted with the Afghan pilot flying the plane and that it was indeed a Taliban fighter being lowered from a Blackhawk helicopter to plant the new flag on the building.  He also added that the endeavour ended in failure.

Afghan pilot flying this is someone I have known over the years. He was trained in the US and UAE, he confirmed to me that he flew the Blackhawk helicopter. Taliban fighter seen here was trying to install Taliban flag from air but it didn’t work in the end. https://t.co/wnF8ep1zEl

Following the fact checks, Cruz took to social media and shared a disclaimer.

It turns out the post I shared w/ a video of Taliban “hanging a man” from a helicopter may be inaccurate. So I deleted the tweet.

What remains accurate is:

- The Taliban are brutal terrorists.

- We left them millions in US military equipment, including Black Hawk helicopters. https://t.co/zOvNM5UXUW

USA Today also confirmed the report.  Tabasum Radio, a radio station that had shared the video told the news outlet that the video showed someone trying to hoist a flag.

"One of the Taliban government's bodyguards tried to tie the flag to the 100-meter-high antenna by helicopter but was unable to do so," the report quoted it as saying.

This is not the first report of the Taliban's alleged brutality that has surfaced on social media, only to be debunked by fact-checkers. First, the video of a CNN journalist allegedly covering her hed for the first time while reporting after the Taliban took over went viral as a symbol of oppression under Taliban rule. The insinuation was later proved untrue. Another report of an Afghan woman pilot being stoned to death have also remained unsubstantiated by evidence.

While it is true that Taliban fighters have indeed taken over American aircraft such as Chinook helicopters that were taken from Kabul airport after the US' departure, it seems that videos of the Taliban carrying out public executions were not true and conflagrate on social media after being shared by journalists and politicians without first verifying the source.