Plans To Stage Armed Protests In All 50 State Capitols Ahead Of Joe Biden's Inauguration: FBI Report

The security agency and other experts warn of violent resistance by Trump supporters, white supremacists and other far-right extremists 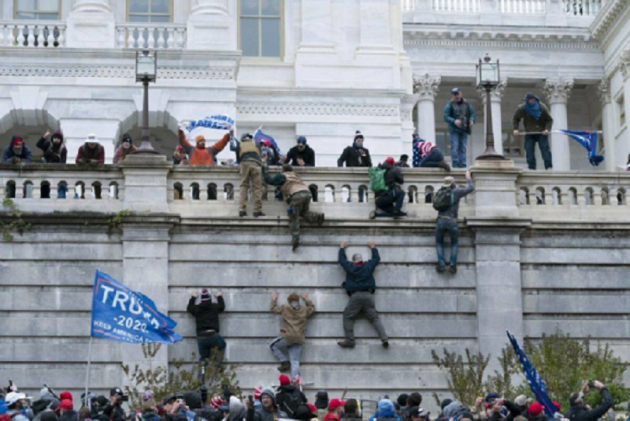 The FBI is warning of plans for armed protests at all 50 state capitals and in Washington, D.C., in the days leading up to President-elect Joe Biden’s inauguration, stoking fears of more bloodshed after last week’s deadly siege at the U.S. Capitol.

An internal FBI bulletin warned, as of Sunday, that the nationwide protests may start later this week and extend through Biden’s Jan. 20 inauguration, according to two law enforcement officials who read details of the memo to The Associated Press. Investigators believe some of the people are members of extremist groups, the officials said. The bulletin was first reported by ABC.

“Armed protests are being planned at all 50 state capitols from 16 January through at least 20 January, and at the U.S. Capitol from 17 January through 20 January,” the bulletin said, according to one official. The officials were not authorized to speak publicly and spoke to the AP on condition of anonymity.

The FBI issued at least one other bulletin — they go out to law enforcement nationwide on the topic — before the riots last week. On Dec. 29, it warned of the potential for armed demonstrators targeting legislatures, the second official said.

“While our standard practice is to not comment on specific intelligence products, the FBI is supporting our state, local, and federal law enforcement partners with maintaining public safety in the communities we serve,” the bureau said in a statement. “Our efforts are focused on identifying, investigating, and disrupting individuals that are inciting violence and engaging in criminal activity.”

The FBI said it wasn’t focused on peaceful protests but “on those threatening their safety and the safety of other citizens with violence and destruction of property.”

Army Gen. Daniel Hokanson, chief of the National Guard Bureau, told reporters Monday that the Guard is also looking at any issues across the country.

“We’re keeping a look across the entire country to make sure that we’re monitoring, and that our Guards in every state are in close coordination with their local law enforcement agencies to provide any support requested,” he said.

The riots followed weeks of online calls for violence in the nation’s capital in the waning days of Donald Trump’s presidency. There have been several arrests, and at least two Capitol police officers, one who took a selfie with rioters, and another who put on a Make America Great Again hat, were suspended. At least a dozen more are under investigation, according to lawmakers.

A tweet in which Trump promised that last Wednesday’s event in Washington, D.C., “will be wild” fueled a “month-long frenzy of incitements, strategizing, and embrace of violence against lawmakers,” according to a research group that tracks online extremism activity, In a report issued Saturday, the SITE Intelligence Group also warned that the Capitol attack has emboldened Trump-supporting extremists.

“No matter how all this plays out, its only the beginning,” posted a user on TheDonald message board, according to the report.

Mark Pitcavage, a senior research fellow at the Anti-Defamation League’s Center on Extremism, said authorities in state capitals and other major cities besides Washington should prepare for the possibility of violent protests next week.

Pitcavage tracks militia, white supremacists and other far-right extremists, but he said the Capitol siege demonstrated the emergence of a new movement of ”Trumpist extremists, so caught up in the cult of personality around Trump that they may be willing to break the law or engage in violence purely in support of Trump and whatever he wants.”

The talk of armed marches next week isn’t limited to “radicalized” Trump supporters. State capital events on January 17 appear to be promoted by supporters of the anti-government, pro-gun “boogaloo” movement. Boogaloo followers advocate for a second civil war or the collapse of society, and they don’t adhere to a coherent political philosophy.

Posts on social media sites also have promoted a “Million Militia March” on the day of Biden’s inauguration. Pitcavage said the event, apparently organized by a promoter of the pro-Trump “QAnon” conspiracy theory, appears unlikely to draw a massive crowd.

Javed Ali, a former FBI senior intelligence officer who teaches courses in counterterrorism at the University of Michigan, said it can be challenging for law enforcement to identify the line between people exercising their constitutionally protected rights to bear arms and free speech and those who pose “a real operational threat.”

“The FBI just can’t passively sit in websites and forums and social media platforms, waiting to see who’s going to present a direct threat versus just someone who is being highly radicalized,” he said. “There has to be an investigative predicate for the FBI to then start even the lowest form of an investigation.”

David Deitch, an attorney who was a prosecutor in the Justice Department’s counterterrorism section from 2003 to 2007, said law enforcement must recognize a “tenuous balance” between protected free speech and speech that intends to incites violence.

“It’s a very fact-based, case-by-case determination,” he said. “There’s no one factor that’s going to determine all of it. It’s certainly going to be a judgment call on the part of law enforcement about whether and when to intervene.”