US President Joe Biden will host the summit on September 24. 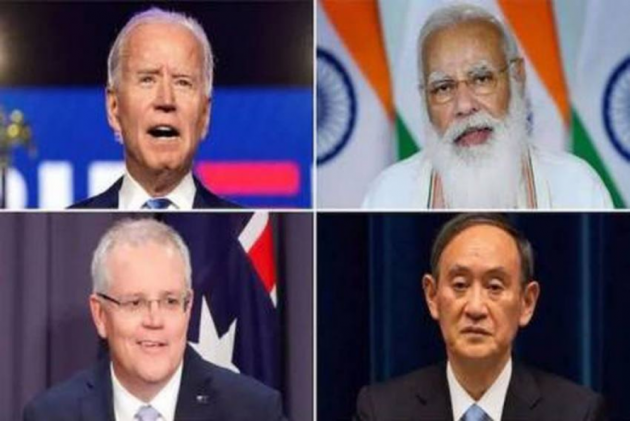 Experts believe that the first-ever in-person Quad summit involving Australia, India, Japan and the United States at the White House asserts America's Indo-Pacific pivot is in full swing under the Joe Biden administration.

Biden will host the summit on September 24 that will be attended by Prime Minister Narendra Modi, Australian Prime Minister Scott Morrison and Japanese premier Yoshihide Suga, signalling Washington's focus on the Indo-Pacific region in the face of China's growing economic and military clout.

The leaders will discuss promoting a free and open Indo-Pacific, address the climate crisis and deepen their ties and advance practical cooperation on areas like combatting COVID-19.

They will also hold talks about partnering on emerging technologies and cyberspace would also be held.

Mukesh Aghi president of US India Strategic and Partnership Forum said, "The Quad Summit will leverage the economic potential of trade while strengthening supply chains and enhancing vaccine diplomacy to tackle the COVID-19 pandemic and climate change -- the two greatest challenges of our time."

The rampant pace at which the Quad has moved from idea to inception to inspiration is a testament to the shared vision and priorities of all four democracies, he said.

"Particularly within the group, we see India and the US emerge as strong partners, who realize that apart from advancing strategic interests, there is a need to mitigate regional threats and secure a free and open Indo-Pacific," Aghi said.

According to Dhruva Jaishankar, the executive director of think-tank Observer Research Foundation America, this Quad leaders' summit is a natural culmination of a process that was restarted in 2017, which witnessed a gradual elevation of a partnership among four like-minded and capable democratic powers in the Indo-Pacific.

Rick Rossow, the Wadhwani Chair in the US India Policy Studies at the Centre for Strategic and International Studies think-tank said: "The pivot to the Indo-Pacific is certainly in full swing under the Biden Administration. The Quad's prominence has further increased, leading up to the first-ever in-person leaders' summit in Washington on September 24."

Noting that China's steps to destabilize Asian security have accelerated during the Covid pandemic, he said the need for like-minded nations to work to reinforce global norms is crucial.

"It will be fascinating to get hints as to how the new Australia-UK-US security partnership will interact with the Quad. I also hope the Quad leaders can expand existing working groups to include cooperation on regional infrastructure," he said.

According to Rossow, for India's interest, China's advances in investing in strategic infrastructures, such as ports along the Indian Ocean are among the most pressing security threats.

"Cooperation among Quad members is crucial," he stressed.

Anish Goel, a senior fellow at New America and former White House senior director for South Asia said the White House is making good on its commitment to elevate the status of the Quad, and this meeting comes at a critical time.

All four countries are currently facing numerous security crises, such as North Korea, Afghanistan, and China, that are threatening regional and even global stability, he said.

"Strong, coordinated leadership on these issues will help mitigate any potential calamities. Additionally, their joint leadership will be welcome on global issues such as COVID-19 and climate change which are also both at critical stages right now," Goel said.

The Quad summit also comes right on the heels of the announcement of AUKUS, the new security alliance between Australia, the UK, and the US, he noted, adding that while the attention has been on nuclear submarine technology cooperation, AUKUS is much more than a defence trading alliance, he said.

"It is another mechanism to help ensure global stability and security. With these back-to-back developments, these five countries, led by the United States, are making a strong case that robust, secure democracies can work together for the global good," Goel said.

Further, the bilateral summit between Prime Minister Narendra Modi and President Joe Biden is also an important opportunity to collaborate on regional issues that will have a big impact on both countries.

"The presumed agenda for the summit, including Afghanistan, Pakistan, China, and the Indo-Pacific region, demonstrates that the relationship is now evolving from one that focused on bilateral irritants to global issues.

"These are signs of a strong, mature partnership. Biden and Modi both have an interest in building on this foundation, and hopefully, the summit will demonstrate that," Goel said. (With PTI inputs)