Over 400 firefighters took part in the 15-hour battle to contain the fire that engulfed the centuries-old roof and sent the burnt towering spire through the ceiling. 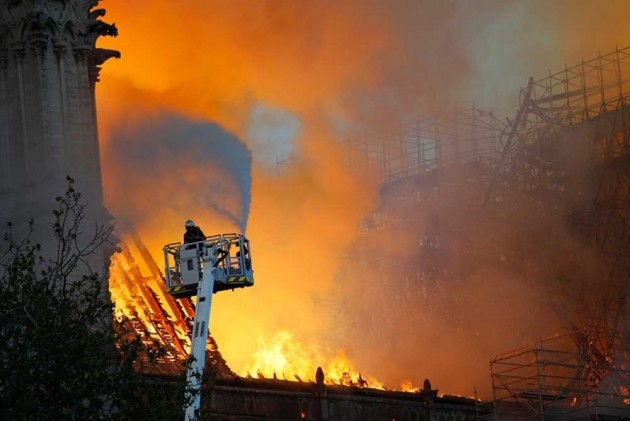 France paid tribute to hundreds of firefighters on Thursday, who put their lives in risk while extinguishing the fire that engulfed Paris’s Notre Dame Cathedral, one of the country’s landmark symbols.

Thousands of people and many elected officials were gathered in front of Paris city hall, to say "thank you" to "those who helped save Notre Dame Cathedral", and applause their professionalism, bravery and determination to save the 12th-century cathedral's structure, Xinhua reported.

"Thank you to Paris firefighters, who saved, at the risk of perishing, a part of us. We have seen your boundless courage, your unwavering determination," Paris mayor Anne Hidalgo said.

Over 400 firefighters took part in the 15-hour battle to contain the fire that engulfed the centuries-old roof and sent the burnt towering spire through the ceiling.

Despite having some trouble to put out the flames due to the building's height, the firefighters succeeded after long hours in stopping the fire's spread to the two bell towers, prevented their collapse and saved the artwork at the back of the cathedral.

"We will all remember April 15, 2019. The place where we were. The people we were with. But above all, the heroism of our firefighters who saved, that night our Dame and with it 8 centuries of our history," Interior Minister Christophe Castaner said.

President Emmanuel Macron held a ceremony at the Elysee Palace to thank the hundreds of firefighters, who battled a fast-moving fire at Notre Dame for nine hours starting Monday evening, preventing the structure’s destruction and rescuing many of the important relics held inside, reported TIME.

At the Elysee Palace, he received 250 firefighters to express France's "pride" of their "exemplary" response to contain the blaze.

"Nobody will forget the first minutes. France, stunned, sees the spire of Notre Dame collapse. And immediately, they take all the risks to save what can be," he said.

"In memory of this night, they will receive the Gold Medal for an act of courage and dedication," he added in a Twitter message.