The challenge was performed at the Trinity Tower, which is a newly opened skyscraper in France. 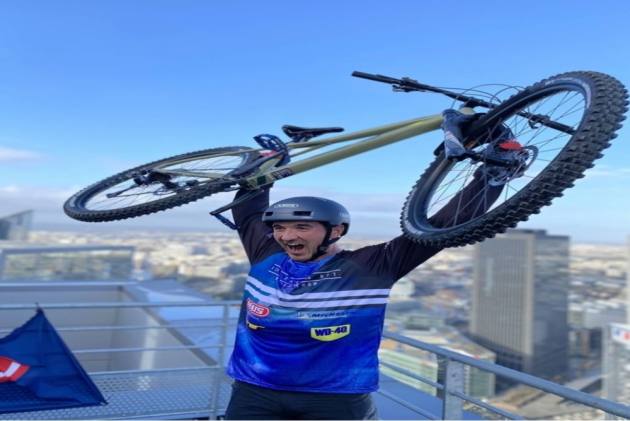 Climbing up your way to 768 steps can prove out to be a challenging task but not for French cyclist Aurelien Fontenoy. Aurelian is a French cyclist and a mountain biker in Puteaux and last week he undertook the challenging task of climbing 768 steps on his bike in 30 minutes that too without touching his feet to the ground. The challenge was performed at the Trinity Tower, which is a newly opened skyscraper in France. News agency Reuters also posted the video of this near impossible challenge on their official Twitter and Youtube accounts.

Aurelian hopped on his bike and landed on the stairs. He swiftly started making his way through the stairs using his tyres and doing a bunny hop on each stair as the camera followed him. He prevented his feet from touching the ground the entire time he was climbing up the stairs. Finally, when he reached the top, he landed his feet on the ground and lifted up his bike on his shoulders out of happiness.

Aurelian completed the entire expedition in just 30 minutes which was another milestone.

The excitement and exhilaration of Aurelian Fontenoy upon reaching the top was clearly visible on the camera and he then addressed the camera in French. He said - “It was incredibly long. I thought it would never end when I was inside, the more I climbed floors, the more pain I felt, especially in the shoulders, under my feet, everywhere."

"But I am really very happy, especially with the last metal staircase, which was very steep and slippery, there was no room for mistakes,” he added.

Explained: What are the WHO Global Air Quality Guidelines

Covid-19 Cases Declining Around The World, Says WHO

Taliban Nominates Shaheen As Afghan Envoy To UN, Wants Him To Participate At UNGA