From Greta Thunberg's Rising Call For Action To Amazon Fires: 2019, A Year Of Climate Emergency 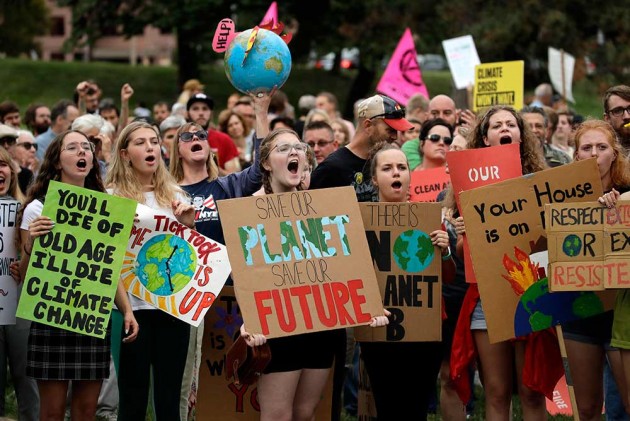 “We are in the beginning of a mass extinction, and all you can talk about is money and fairy tales of eternal economic growth. How dare you!” said 16-year-old Greta Thunberg as she made an emotional and impassioned speech at the UN Climate Summit held in New York in September. Without mincing words, she called out the world leaders for their “empty words” on climate change and sought accountability from them for endangering the lives of the young.

“The eyes of all future generations are upon you. And if you choose to fail us, I say: We will never forgive you,” she spoke on behalf of the youth of the world.

The Swedish teen first came into the limelight last year through her solitary protest outside her country’s parliament building where she camped every day, during school hours, carrying a banner “skolstrejk för klimatet” (school strike for climate) asking her country to align with the Paris Climate Accord.

Why Is Part Of The Amazon Burning?

Soon, this protest took the shape of a movement and assumed global dimensions. Calling it “Fridays for Future”, she asked students across the globe to follow her lead and urge their respective countries to act on behalf of the climate.

On March 15, 2019, an unprecedented global strike for climate was held by over 100,000 students, youth and activists who protested in the US, UK, South Africa, Russia, Brussels, Germany, Russia, India, South Korea, and Hong Kong and so on. This became one of the largest global environment marches in history.

But while this protest was happening, the US administration began the formal process to exit from the Paris Climate Accord in November this year.

The withdrawal of the US, which is the second-largest emitter of Carbon Dioxide, has been concerning. Financial aid, which is to be provided by the developed countries to the developing ones as part of the deal, will also take a hit with the exit of the wealthiest country. The U.S had pledged to reduce its emissions by 26% to 28% by the year 2025 from 2005 levels as part of its commitment. But chances of the US sticking to the target of reducing emissions look bleak now as it’s not bound to fulfil its pledge anymore. Reports of thermal power plants and coal mines getting re-opened in the country are signs enough to predict the near future.

However, environmental activists around the world are putting their bet on the upcoming US presidential elections which might throw up a new president who would agree to reverse the flow of things as the final exit from the Paris deal remains to be sealed in November 2020.
The year 2019 had a few bizarre climate phenomena as well.

In August this year, the 'Lungs of the World' choked to death as the world gazed at horrific pictures of the Amazon forest in Brazil being burned down. International outrage poured in as fires pervaded virgin forests, threatening those who live there, including the Guajajara indigenous community. According to a Vice report, 172,000 soccer fields of forest were cleared and burned in 2019. The fires were both a result of wildfires and the “slash-and-burn” agriculture followed by locals. Eventually, world leaders got involved, offering money for firefighting efforts and publicly shaming Brazil’s new populist president, Jair Bolsonaro, for failing to act.

The year also saw freak “arctic blazes”. According to a Down to Earth report, the Arctic was burning at a historic pace. Between July and early September, fire in the Arctic region charred about 2.4 million hectares (ha) of Siberian forest. In Alaska, fires consumed 1 million ha of tundra and snow forests.

While wildfires between May and October every year are a common phenomenon in the Northern Hemisphere, the latitudes of these fires, their duration and intensity this time surprised experts. Though the reason for the fires, was unknown, the experts believed “the region is warming twice as fast as the rest of the planet”.

The year 2019 concluded the “warmest decade” on record, accompanied by retreating ice and record sea levels “driven by greenhouse gases from human activities”, according to the United Nations’ World Meteorological Organization (WMO). Moreover, 2019 is on track to become the second or third warmest year in history, the WMO’s report said.

Meanwhile, closer to home, Delhi kept up to tradition and saw a thick white haze descend through its winter’s sky. The smog became a topic of heated national debate. While ‘Odd-Even’ vehicle-rationing scheme was brought back to tackle the air quality, it declined to a hazardous level with AQI touching 999 in several parts of Delhi—a number beyond which reading is not available. This prompted Delhi Chief Minister Arvind Kejriwal to call the national capital a “gas chamber” while he blamed neighbouring Punjab and Haryana’s stubble burning practices as the main contributor to Delhi’s Smog.

India would phase out single-use plastics by 2022, PM Modi announced at the Sabarmati riverfront in Ahmedabad, Gujarat, on October 2, 2019.

Mirroring the global trend of citizens coming up in arms against the government, the country’s financial capital, Mumbai, reverberated with huge protests over cutting of over 2000 trees to make way for a metro project. Mumbai Metro Rail Corporation Limited (MMRCL) had proposed to cut 2700 trees from Aarey Colony, which is described as the city’s green lungs. Climate activists have expressed serious concerns over the damage to the indigenous trees and species of the area located on the banks of Mithi River.

The tussle between the government and the protesters reached the crescendo when the authorities cut all the trees in the dead of night before the Supreme Court could opine on the matter. Getting the wind of the overnight happenings, the protesters clashed with the authorities leading to the arrest of 29 individuals.

The year has concluded on an urgent need for a call to action to slow down the adversities inflicted by climate change, which is now being called the ‘climate emergency’—Oxford Dictionaries’ word of the year. Summing up the need of the hour, UN Secretary-General António Guterres has said, “Extreme weather events are becoming more frequent and more deadly. Our ‘Climate Action’ efforts so far have been inadequate. We need greater ambition from everyone now.”