Ground Zero: A Selfie Stop For Some, A Cemetery For Others

Visitors from around the world come and go. But for those who live and work close to the memorial, the names on the parapets are more than mere engravings on bronze, and the 55,000 gallons of water recycling through the reflecting pools is more than a social media post. 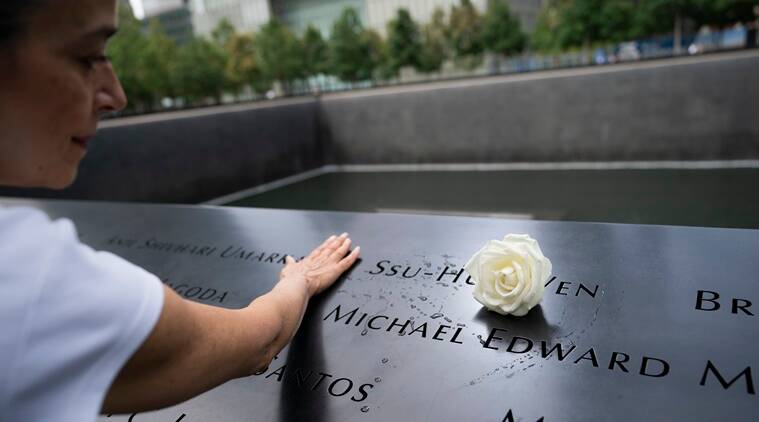 Twenty years after terrorists flew two planes into the World Trade Center, the memorial at ground zero has its own routine, not much different from many city tourist sites.

Visitors from around the world come and go. They snap selfies as they browse the nearly 3,000 names engraved into the parapets that frame two reflecting pools. Docents give tours. Tourists glance at their watches, decipher subway maps and check off a box. Then they leave.

But for those who live and work close to the memorial, the site is both a part of their daily routine and hallowed ground. The names on the parapets are more than mere engravings on bronze, and the 55,000 gallons of water recycling through the reflecting pools is more than a social media post. It is a constant reminder of that infamous day. It is a cemetery.

After the plaza empties around the reflecting pools each evening, Kevin Hansen pulls on blue work gloves, grabs his torch and begins his nightly work of repairing and maintaining the long, bronze parapets with the names of the dead.

Hansen was 8 and in elementary school on Long Island in 2001.

“You just remember everyone getting phone calls and teachers not knowing what was going on. And then parents were coming to school to pick kids up,” he said.

Of his work, Hansen says, “It's important to me."

"This is a sign that we all came together back in 2001. This is my giveback of patriotism and this (event) cannot be forgotten,” he said. “I believe this place brings people to see that there is evil in the world, but it can be overcome."

While patrolling his beat around the World Trade Center, NYPD officer Mike Dougherty keeps an attentive eye on the memorial, often cleaning grime from the parapets and answering questions for tourists.

“If we see something on the panel we'll make sure to wipe it off, and I see their names and I'll touch them. I'm here looking over them, basically. Try to relay that to people that don't understand what this is all about," he said.

“I get that, a lot of questions sometimes, you know: What is this area?' And I don't take offense to it. I like explaining to them where the buildings stood. What this is all about. Just to keep the memory of everyone in your life when you tell somebody who doesn't have that connection.”

The 25-year NYPD veteran started as an apprentice electrician working inside the World Trade Center before becoming a police officer. He was on patrol in Brooklyn when the planes hit the towers.

When he patrols the memorial plaza now, he sometimes stops in his tracks.

“I'll just be walking around the side or in one of the particular security pools, and sometimes something will just hit me. I just start staring out at the plaza. So, I'll take a couple of minutes to compose myself."

“It's a privilege to be here. I'm at the end of my career, towards the end of it anyway. And I couldn't think of a better place for me to finish up," he said.