Humanitarian aid has been slow to reach those in need, with anger festering in local communities in Haiti. The Caribbean island has raised the official death toll to 2,189 after a massive earthquake hit last weekend. 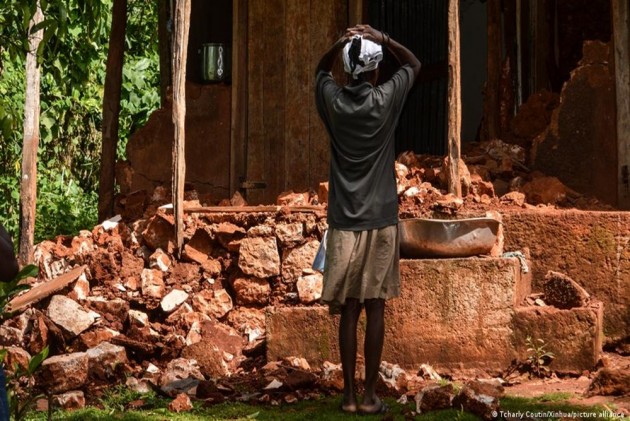 A massive earthquake that hit last week has left Haiti "on its knees," Prime Minister Ariel Henry said on Wednesday, as the official death toll rose to 2,189.

Some 9,900 people were reported injured as slow trickling aid increased frustration among locals in need.

"Haiti is now on its knees," Henry said. "The earthquake that devastated a large part of the south of the country proves once again our limits, and how fragile we are."

Explained: Why Haiti Is Prone To Devastating Earthquakes

The epicenter of Saturday's 7.2 magnitude quake hit the southwestern part of the Caribbean nation, about 78 miles (125 kilometers) west of the capital, Port-au-Prince.

The powerful earthquake caused tens of thousands of houses to collapse. Shortly thereafter, a tropical storm brought torrential downpours on survivors already coping with the catastrophe.

Haiti is still recovering from a 2010 earthquake that killed over 200,000. The latest quake hit just weeks after the island plunged into political turmoil after the assassination of President Jovenel Moise on July 7.

More than 30,000 families have been left homeless in the aftermath of the quake.

Schools, offices and churches have been destroyed or badly damaged, leaving thousands of locals to seek shelter in tents mushrooming across the country.

"We need help," said Roosevelt Milford, a pastor speaking from a tent city in Les Cayes. They lacked basic provisions like food, clean drinking water, and shelter from the rain, which has been adding pressure on relief efforts.

In L'Asile, northeast of Les Cayes, community leader Aldorf Hilaire said survivors were dependent on support from charities like Doctors Without Borders as government help had not arrived.

"We are desperate," he told Reuters news agency. "The springs are dirty: the water is not drinkable ... We had a bad night during the storm and the people need tents and tarps."

With hospitals overrun with injured residents, medical facilities in the areas worst hit by the earthquake were in desperate need of medical equipment, international aid workers said.

"The hospitals are all broken and collapsed, the operating rooms aren't functional, and then if you bring tents, it's hurricane season, they can blow right away," said Dr. Barth Green, president of Project Medishare, an organization to improve health services in Haiti, told the Associated Press.

While US Coast Guard helicopter crews were engaged in ferrying the injured to less-stressed medical facilities, the USS Arlington, a US Navy amphibious warship, was expected to head for Haiti with a surgical team and landing craft onboard.

The slow pace of aid efforts pushed groups of people to gather outside the terminal at Les Cayes airport as an aid flight arrived. Warning shots were fired to disperse a group of men as supplies were loaded into waiting trucks.

At least 600,000 people were in need of humanitarian assistance, he said. The government aims to deliver aid to those in need within a week.