Vladimir Putin Treats Xi Jinping With Ice Cream On His Birthday, Calls Him His 'Best Friend'

Xi last week made a three-day visit to Russia to visit Putin, whom he described as his 'best friend', as the two countries seek to bolster ties amid shared tensions with the US. 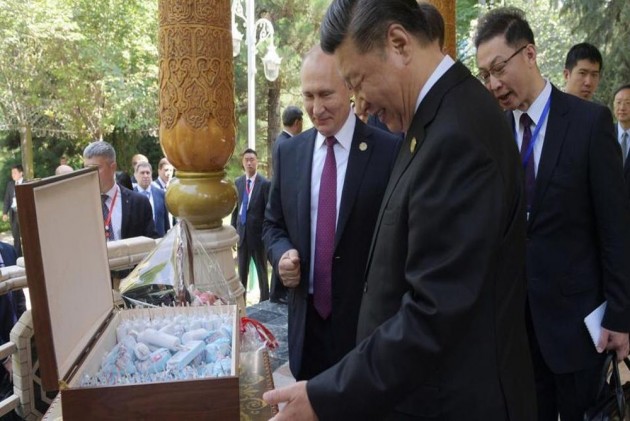 Russian President Vladimir Putin presented his Chinese counterpart Xi Jinping with a giant box of ice cream for his 66th birthday before a summit in Tajikistan on Saturday, the Kremlin said, in a sign of the pair's warm ties.

"Happy birthday, my best wishes... I am delighted to have a friend like you," Putin told Xi, according to the Kremlin website.

The two leaders met in the Tajik capital Dushanbe for the fifth summit of the Conference on Interaction and Confidence Building Measures in Asia (CICA), which brought together delegations from 27 countries including Iran and Qatar.

Xi last week made a three-day visit to Russia to visit Putin, whom he described as his "best friend", as the two countries seek to bolster ties amid shared tensions with the US.

"We came with good gifts," Putin said on Saturday before presenting a huge box full of Russian ice cream as temperatures in Dushanbe sweltered above 30C degrees (86 Fahrenheit).

Other presents included a cake and an ornate vase.
Pictures showed Xi and Putin holding up champagne glasses to toast the birthday.

"Our whole team, and I can even say our whole nation, wishes you all the best in the world because you do a lot for the development of relations between our two countries," said Putin.

"You enjoy great authority in the hearts of the Chinese people," Xi said.

The two men last week signed a joint statement on the development of comprehensive partnership and strategic cooperation.

The CICA summit, which was also attended by Turkish President Recip Tayyip Erdogan, aimed to explore ideas to stabilise Asia amid turbulent geopolitics.

"The Russian leader praised Xi Jinping's role in the development of bilateral relations and noted the success of the recent state visit by China's President to Russia," the Kremlin website said.