A European Union funded anti discrimination campaign to promote Hijab's acceptance has received flak online, even by the Council of Europe. 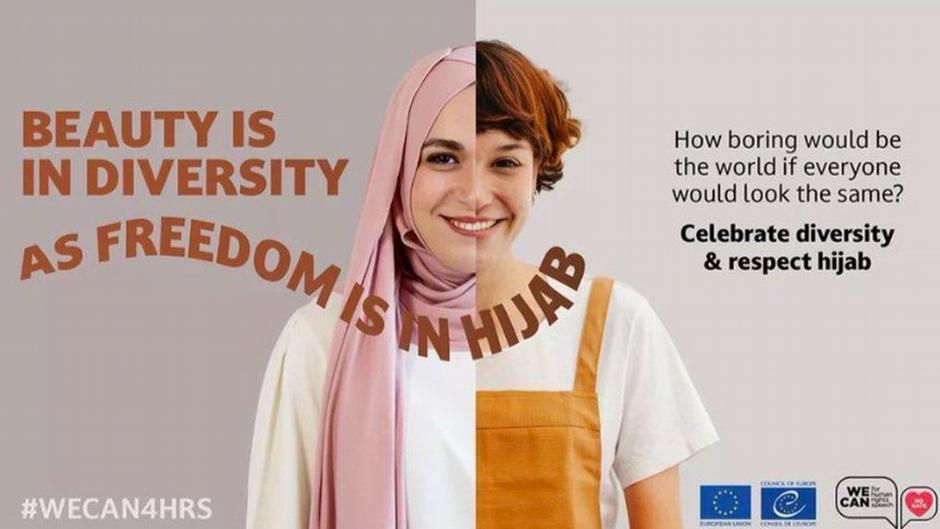 An anti-discrimination campaign to promote acceptance of the hijab has been canceled by the Council of Europe following outrage in France and across Europe. Some are furious it was even made, others that it was pulled.

Young European Muslims say a decision to cancel a newly launched EU online campaign to promote acceptance of hijab is "an attack on human rights."

"Attacks on this vital campaign take place in a wider environment of a shrinking of civic space, where government actors routinely censor and limit the freedom of speech when it doesn't fit their political agenda," said the Forum of European Muslim Youth and Student Organizations (FEMYSO).

A backlash, particularly in France, caused Europe's top human rights organization, the Council of Europe (CoE), to take down posts and ads for the online campaign.

The EU-funded campaign hosted slogans like: "Beauty is in diversity as freedom is in hijab" and "#JOYinHIJAB."

Pictures and videos featured on anti-discrimination campaign posts showed split-screen portraits of women's faces — with one half uncovered and showing their hair and the other half with their hair covered by a hijab.

For its part, the Council of Europe's anti-discrimination division, which oversaw the campaign, said, "these tweets have been deleted and we're going to think about a better presentation for the project."

Why were the hijab campaign posts removed?
Following the removal of the posts, Marija Pejcinovic Buric, the CoE's secretary-general, released a statement saying the campaign "reflected individual statements from people who took part in one of the project's workshops and doesn't reflect the position of the Council of Europe."

Members of FEMYSO were part of the project along with a number of other Muslim and non-Muslim groups, according to the CoE.

"It is another example of how the rights of Muslim women are non-existent to those who claim to represent or protect notions such as liberty, equality and freedom," said FEMYSO head Hande Taner.

The European Commission, which partly funds the anti-discrimination work at the CoE, said it had "not validated" the visual elements of the campaign and has said it is looking into potentially recuperating some of the money it paid.

While the debate in Europe centers around a woman's right to wear the hijab, in the Muslim world many countries insist that they are worn. In Iran, women can be punished by up to two months in prison for appearing in public without a head covering, and in Saudi Arabia women are obliged by law to wear a hijab. Since the Taliban regained control in Afghanistan, there have been multiple reports of women facing punishment for not wearing a headscarf.

Conservative Belgian politician Theo Francken responded to the EU campaign by highlighting the fact that in many majority Muslim countries wearing the hijab is a compulsory. "Just ask all those millions of girls in Nigeria, Burkina, Somalia or Afghanistan [if ‘freedom is a hijab']" he tweeted.

What does the backlash have to do with upcoming French election?
The outrage over the campaign came mainly in France, which is gearing up for a presidential election in April 2022.

Michel Barnier, the lead candidate for the center-right Republican party, echoed a critical sentiment against the ads. "I would have liked the people responsible for this bad campaign to go and question ... the women of Kabul who are fighting not to wear this veil," he said.

Opposition to the campaign has united the left and the right wings of French political spectrum.

Laurence Rossignol, for instance, a Socialist senator and former women's rights minister, said: "A reminder that women are free to wear the hijab is one thing. Saying that freedom is in the hijab is another."

Marine Le Pen, the far-right presidential candidate and leader of the National Rally party, tweeted: "It's when women take their veil off that they become free, not the other way around."

France hosts Europe's largest Muslim population, numbering around 5 million people. Following Islamist extremist attacks like those in Paris in November 2015, Muslim organizations say there has been a marked increase in Islamophobia in the country.

French politicians adhere to a tradition of strict secularism from all religions. Religious clothing is banned in all of the country's schools, and for all people employed in publicly funded jobs. There have also been numerous instances of Muslim women being thrown out of public swimming pools for staging protests in favor of the burkini — a swimsuit that fully covers the body and hair.

As of 2018, France, Belgium, Austria, Denmark and Bulgaria all had national bans on full face coverings.

Does Europe have hijab bans?
In July 2021, judges at the European Court of Justice (ECJ), the EU's top court, ruled that women could be fired from their jobs for refusing to remove their hijab if they work in a job that deals with the public.

The court was responding to a request by German judges who had upheld the right of two employers to fire two women who insisted on wearing their headscarves to work. One was working in a supermarket and the other was a support worker for children with special needs.

"A prohibition on wearing any visible form of expression of political, philosophical or religious beliefs in the workplace may be justified by the employer's need to present a neutral image toward customers or to prevent social disputes," the judges at the ECJ said.