India-Sri Lanka ties have come a long way since the time when Colombo played the China Card. 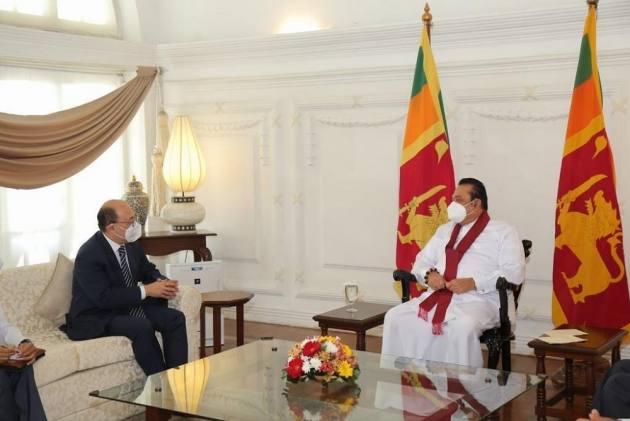 Foreign secretary Harsh Shringla is wrapping up his four-day trip to Colombo aimed at further consolidating India’s ties with its island neighbour. Shringla’s visit is at a time of unprecedented financial and food crisis in the country. The island nation depends heavily on food imports with foreign exchange running low and food prices have soared.

The foreign secretary’s visit began Monday with a courtesy call on Prime Minister Mahinda Rajapaksa. Shringla will meet President Gotabaya Rajapaksa later in the day. Speaking at a ceremony to inaugurate India’s development projects on the island, Shringla referred to Mahinda Rajapaksa as an ``ardent friend of India and a steady source of support for the deepening of India-Sri Lanka engagement.’’

This is a sea change from the time when New Delhi regarded Rajapaksa as threat to Indian interests as he played the China card during his second term as President from 2010 to 2015. Alarm bells rang in New Delhi when a Chinese submarine docked in Colombo harbour not once but twice in 2014. But things have changed dramatically since the time when India, the US and UK introduced resolutions against Sri Lanka for widespread human rights abuse during the last days of the military campaign against the Liberation Tigers of Tamil Eelam.

When the Rajapaksa brothers came back to power with a thumping majority both in the presidential and parliamentary polls, India went out of its way to repair ties with the ruling family. Prime Minister Narendra Modi was among the first to congratulate Gotabaya Rajapaksa when he won the presidential polls by a landslide in 2019.  Foreign minister Jaishankar traveled to Colombo immediately after the new president took office. Jaishankar served as a young diplomat in Colombo when the Indian Peace Keeping Force was stationed in the northern and eastern provinces. He knows all major political figures on the island. That meeting helped to dramatically improve frayed ties between the two neighbours. The President’s first visit abroad was to India. Later after taking over as Prime Minister in his brother’s cabinet, Mahinda Rajapaksa too made Delhi his first foreign trip, underlining the importance of relations with India. Both the Rajapaksa’s and the Modi government did their bit to rebuild and nurture ties. Sri Lanka’s foreign secretary Admiral Jayanath Colombage, has said in several interviews that one of the key elements of Sri Lanka’s foreign policy is to remain neutral and not be a party to big power rivalry. But President Gotabaya believes that when it comes to strategic security, Sri Lanka should adopt an ``India first’’ policy. Colombage went on to explain his President’s words saying Sri Lanka cannot afford to be a strategic security threat to India. Without saying so in words, this assurance means that China will not be able to use Sri Lankan soil to target India and that Colombo is mindful of India’s security concerns. Today India-Lanka ties are on a strong wicket. China continues to dominate the economic sector with some massive infrastructure projects. There is however much heartburn over debt servicing of Chinese loans. The Hambantota port in the south of the island had to be handed over to China on a 99-year lease, thanks to Colombo’s inability to repay the huge loan.

Sri Lanka is very much a part of India’s maritime outreach, where the attempt is to build a network of friendly countries across the Indian Ocean. New Delhi is mixing this with humanitarian assistance in times of disaster and hopes to play its part in being the first respondent in case of natural disaster in the region. Sri Lanka, Maldives, Seychelles, and Mauritius are some of the island nations with which the Indian navy closely coordinates. This attempt comes at a time when the Chinese navy increasing its patrol across the Indian Ocean.

Apart from meeting the top political leadership on the island, Shringla also took time to pray at the Kandy’s famous Temple of the Tooth, one of the holiest Buddhist shrines in the sub-continent. He also flew to Jaffna, the provincial capital of the Tamil-majority Northern province. He visited the Jaffna Cultural Centre, built with Indian grant assistance. After the 2009 defeat of the LTTE, India is helping in reconstruction efforts. New Delhi is providing houses to Tamil families forced to leave their homes during the military action against the LTTE. Shringla handed over some 1235 houses during his visit.

In short, ties between India and Sri Lanka have been transformed despite China’s looming economic presence in the island state.