Iranians clutching "Down with USA" signs and portraits of Qasem Soleimani massed as supreme leader Ayatollah Ali Khamenei presided over prayers for the slain head of the Revolutionary Guards' Quds Force. 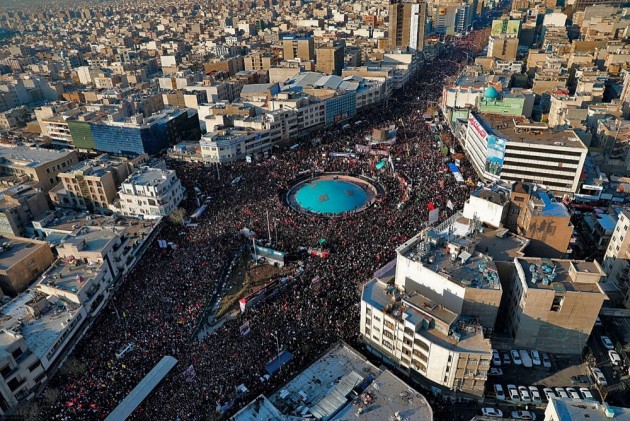 A sea of black-clad Iranians on Monday mourned the top commander killed in last week's US drone strike that inflamed tensions across the Middle East, as NATO was set to discuss the spiralling crisis.

Iranians clutching "Down with USA" signs and portraits of their hero Qasem Soleimani massed as supreme leader Ayatollah Ali Khamenei presided over prayers for the slain head of the Revolutionary Guards' Quds Force.

The targeted killing of 62-year-old Soleimani ordered by US President Donald Trump saw the Islamic republic vow "severe revenge" before Tehran also took a further step back from the already tattered 2015 nuclear accord with world powers.

In an escalating war of words that has heightened international concern and rattled financial markets, Trump threatened yet more "major retaliation" if Tehran hits back, including strikes on Iranian cultural sites.

Trump has warned that a forced departure of US troops would prompt sanctions against Iraq that would "make Iranian sanctions look somewhat tame".

NATO ambassadors were to hold an extraordinary meeting at Brussels headquarters to "address the situation in the region," said an official of the alliance, which has been forced to suspend its training mission in Iraq.

Germany, France and Britain urged Iran to refrain from taking "further violent actions or support for them", or from steps that further weaken the 2015 nuclear deal.

"We call on all the players involved to show utmost restraint and responsibility." The nuclear deal had offered Tehran relief from sanctions in return for curbs to prevent it acquiring nuclear weapons -- but Trump's withdrawal from it last year has dramatically weakened the agreement.

Despite its latest nuclear step back on Sunday, Iran insisted it will continue to fully cooperate with the UN agency overseeing its atomic programme.

The European leaders also pleaded with all parties to not jeopardise the ongoing battle against the Islamic State jihadist group, which has lost its self-proclaimed "caliphate" but whose militants remain active.

Amid the geopolitical tensions in the oil-rich region, crude prices surged and most equities tumbled while the safe-haven commodity gold hit a more than six-year high in early trading Monday.

The raw emotions sparked by the US killing of Soleimani were on full display in Tehran, where mourners formed a sea of black, dotted with red Shiite flags and white signs, in what state television said was a "several million-strong" turnout.

As they marched down a main artery of the Iranian capital, the mourners chanted "Death to America" and "Death to Israel".

Khamenei appeared to cry as he prayed over the flag-draped coffins containing the remains of Soleimani and five other "martyrs" killed in the strike.

The supreme leader was flanked by President Hassan Rouhani and other top political and military figures as well as Soleimani's son and the slain general's replacement as Quds commander, Esmail Qaani. 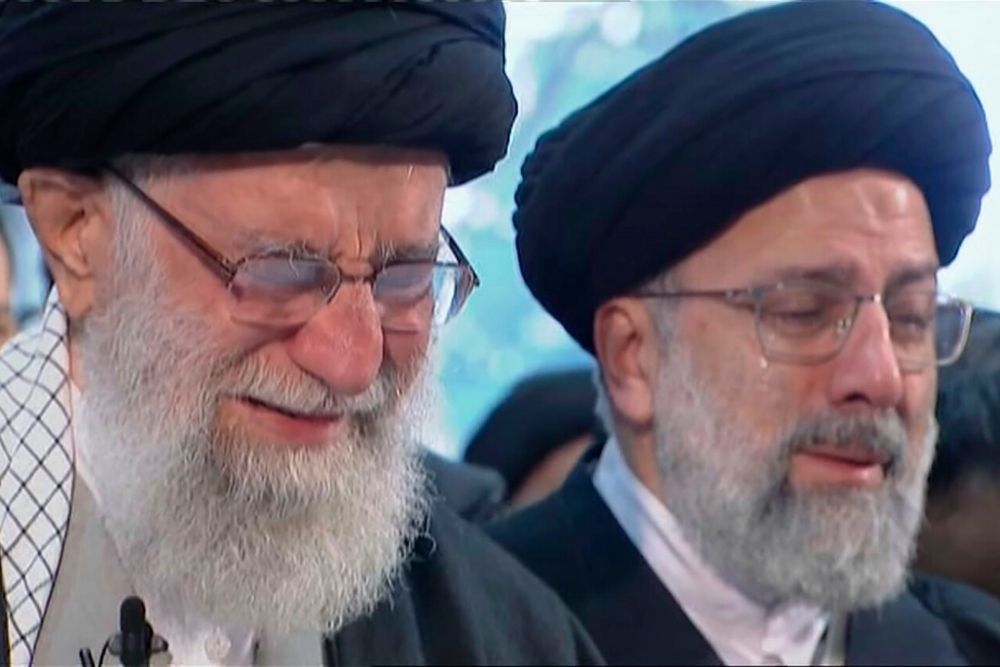 In this image taken from video, Iranian Supreme Leader Ayatollah Ali Khamenei, left, openly weeps as he leads a prayer over the coffin of Gen. Qassem Soleimani, who was killed in Iraq in a U.S. drone strike on Friday, at the Tehran University campus, in Tehran, Iran. (Iran Press TV via AP)

"Down with USA," read a placard held up by a young woman wearing a black chadour, while another sign, held aloft by a man, called for "#hard_revenge".

"We must give a crushing response," one of the mourners told AFP.

"We must target whatever military base they have in the region," said the 61-year-old businessman who gave his name as Afkhami.

"We must attack all that are in the range of our missiles." Soleimani was one of Iran's most popular public figures, seen as a hero of the 1980-88 Iran-Iraq war.

He was also the key figure behind Tehran's alliances across a region where Iran is in often deadly rivalry with US allies Israel and Saudi Arabia.

Trump said last Friday the Quds commander had been planning an "imminent" attack on American diplomats and forces in Iraq.

The US president has also threatened bombing 52 unspecified targets in Iran if Tehran attacks US troops and interests in the region.