The announcement comes as the two countries are feuding over the coronavirus pandemic, with Donald Trump defiantly calling it the 'Chinese virus' and a senior Beijing official promoting conspiracy theories of US involvement. 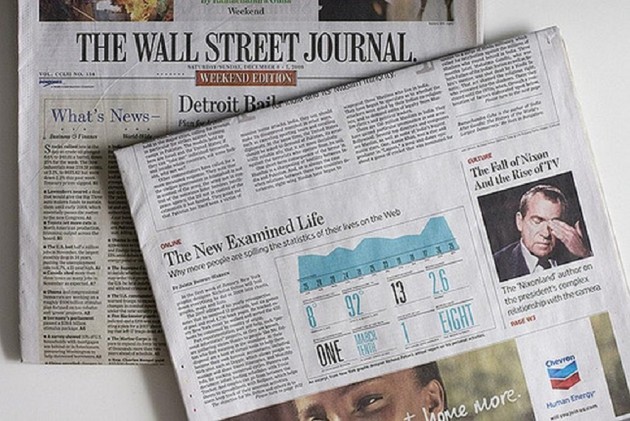 China on Wednesday expelled American journalists at the New York Times, the Washington Post and the Wall Street Journal in the Communist government's most severe move against foreign media in recent memory.

The foreign ministry said in a statement the measure was in retaliation for Washington's decision to cut the number of Chinese nationals allowed to work for Chinese state-run media on American soil.

The announcement comes as the two countries are feuding over the deadly coronavirus pandemic, with President Donald Trump defiantly calling it the "Chinese virus" and a senior official in Beijing promoting conspiracy theories of US involvement.

Starting from Wednesday, the journalists, whose press cards were due to expire later this year, must notify the foreign ministry within four days and hand back their credentials within 10 days, the ministry said.

"They will not be allowed to continue working as journalists in the People's Republic of China, including its Hong Kong and Macao Special Administrative Regions," the statement said.

Beijing also ordered Voice of America, the New York Times, the Wall Street Journal, the Washington Post and Time magazine to declare in writing their staff, finances, operations and real estate in China -- rules similar to those recently imposed on Chinese state media by Washington.

It said it would take further unspecified "reciprocal measures" against American journalists "in response to the discriminatory restrictions the US has imposed on Chinese journalists with regard to visa, administrative review and reporting."

"Should the US choose to go further down the wrong path, it could expect more countermeasures from China," the ministry warned.

US Secretary of State Mike Pompeo said that China was wrong to equate state-run media, which answer to Beijing, and independent US news outlets which can freely report and ask critical questions.

"I regret China's decision today to further foreclose the world's ability to conduct the free press operations that, frankly, would be really good for the Chinese people in these incredibly challenging global times, where more information, more transparency are what will save lives," Pompeo told reporters.

"This is unfortunate," Pompeo said. "I hope they will reconsider." Marty Baron, executive editor of the Washington Post, also "unequivocally" condemned the move.

"The Chinese government's decision is particularly regrettable because it comes in the midst of an unprecedented global crisis, when clear and reliable information about the international response to Covid-19 is essential," he said in a statement.

China has already expelled three other Wall Street Journal reporters -- two Americans and one Australian -- over what it deemed a racist headline by the US newspaper.

The headline, "China is the Real Sick Man of Asia", was on an opinion piece that the three journalists were not involved in writing.

But those expulsions last month had also been seen by some observers as a tit-for-tat move over the US decision to reclassify Chinese state-run media operating in the United States as foreign missions.

The Foreign Correspondents' Club of China said at the time that China had not outright expelled a foreign correspondent since 1998.

Nine journalists have been either expelled or effectively expelled through non-renewal of visas since 2013, it added.

Another Wall Street Journal reporter was effectively kicked out last year after he wrote an article on one of President Xi Jinping's cousins.

In its annual report on press rights in China, the FCCC said Beijing was using visas as a weapon to intimidate foreign press "like never before" and feared it was preparing to kick out more reporters.

The foreign ministry said Wednesday's measures "are entirely necessary and reciprocal countermeasures that China is compelled to take in response to the unreasonable oppression the Chinese media organizations experience in the US."

"They are legitimate and justified self-defense in every sense."