The NASA study has observed that the world is a greener place now than it was 20 years ago. 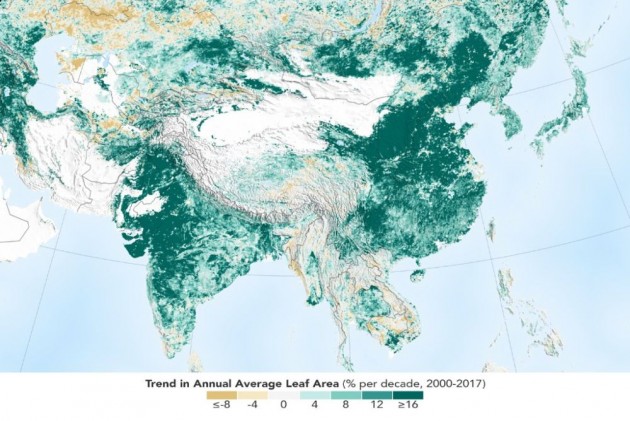 Contrary to the general perception worldwide, India and China are leading the global greening effort, according to a latest NASA study published on Monday.

The world is a greener place than it was 20 years ago, observed the study.

The NASA study based on data received and analysed from its satellite said that India and China are leading in greening on land.

Good news for green thumbs: The world is a greener place than it was 20 years ago. ðÂÂÂ Data from @NASAEarth satellites shows that human activity in China and India dominate this greening of the planet, thanks to tree planting & agriculture. Get the data: https://t.co/8LRXR7xcpS pic.twitter.com/UlyXhzA9Uq

"China and India account for one-third of the greening but contain only 9 per cent of the planet's land area covered in vegetation," said lead author Chi Chen of Boston University.

"That is a surprising finding, considering the general notion of land degradation in populous countries from overexploitation," he said.

The study published on February 11, in the journal Nature Sustainability said that recent satellite data (2000–2017) reveal a greening pattern that is strikingly prominent in China and India and overlaps with croplands worldwide.

China is engineering ambitious programmes to conserve and expand forests with the goal of mitigating land degradation, air pollution and climate change.

Food production in China and India has increased by over 35 per cent since 2000 mostly owing to an increase in the harvested area through multiple cropping facilitated by fertiliser use and surface- and/or groundwater irrigation.

“When the greening of the Earth was first observed, we thought it was due to a warmer, wetter climate and fertilization from the added carbon dioxide in the atmosphere,” said Rama Nemani, a research scientist at NASAÂÂs Ames Research Center and a co-author of the study.

This study was made possible thanks to a two-decade-long data record from the Moderate Resolution Imaging Spectroradiometer (MODIS) instruments on NASA’s Terra and Aqua satellites. “Now with the MODIS data, we see that humans are also contributing,” she said.

Observing that once people realise there is a problem, they tend to fix it, Nemani said in the 1970s and 80s in India and China, the situation around vegetation loss was not good.

“In the 1990s, people realized it, and today things have improved. Humans are incredibly resilient. That’s what we see in the satellite data,” she said.

According to the paper, how the greening trend may change in the future depends on numerous factors.

For example, increased food production in India is facilitated by groundwater irrigation. If the groundwater is depleted, this trend may change, it said.

The researchers also pointed out that the gain in greenness around the world does not necessarily offset the loss of natural vegetation in tropical regions such as Brazil and Indonesia. There are consequences for sustainability and biodiversity in those ecosystems beyond the simple greenness of the landscape, the research study said.