Indian Navy held the Malabar exercise with US, Australia and Japan last month. 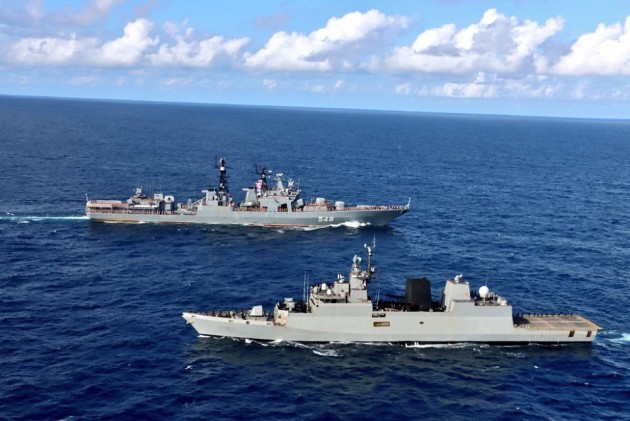 India on Friday kick-started a two-day naval exercise with Russia in the eastern Indian Ocean, two weeks after it conducted the Malabar wargames with the US, Australia and Japan.

The Indian Navy has been represented by indigenously constructed guided-missile frigate Shivalik and anti-submarine corvette Kadmatt along with their integral helicopters.

"The passage exercises are conducted regularly by the Indian Navy with units of friendly foreign navies while visiting each other's ports or during a rendezvous at sea," he said.

He said the ongoing exercise reflects the strong long-term strategic relationship between the two countries.

"This exercise is being conducted on the occasion of 'Navy Day' which emphasises the strong bonds of friendship shared between the two friendly militaries. It would be another step towards strengthening Indo-Russian defence relations," Commander Madhwal said.

Navy Day is celebrated every year on December 4 to commemorate the Indian Navy's achievement in inflicting heavy damage on Pakistani vessels in Karachi harbour during the India-Pakistan war in 1971.

The Indian and the Russian navies conduct a biennial exercise called ''Indra Navy'' and its last edition took place in the Northern Indian Ocean Region in September.

Last month, India held the Malabar exercise. India invited Australia for the exercise, effectively making it a drill by all the Quad member nations.

The Quad, comprising India, the US, Australia and Japan, is aimed at ensuring a free and open Indo-Pacific, a region that witnessed increasing Chinese military assertiveness in recent years.

China has been suspicious about the purpose of the Malabar exercise as it feels that the annual wargame is an effort to contain its influence in the Indo-Pacific region.

Notwithstanding the coronavirus pandemic, the Indian Navy participated in maritime exercises in the last few months with a number of countries.