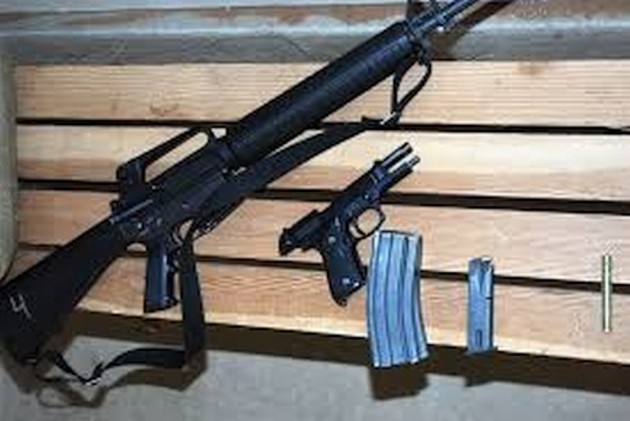 An Indian-American man has been indicted in the US for possessing a bump stock attached to his rifle, the first known case since the device was banned by the Trump administration earlier this year.

The bump stocks are the attachments that enable semiautomatic rifles to fire in sustained, rapid bursts.

He was also found to have been previously committed to a mental institution and was barred from possessing a firearm or ammunition.

Authorities became suspicious of Dhingra last month after he left a "concerning message" with the George W Bush Foundation.

He also sent an email to the foundation asking Bush to "send one of your boys to come and murder me."

Secret Service agents opened an investigation into Dhingra which led them to his home, where they found 277 rounds of 9 mm ammunition, a Glock pistol, and a Colt rifle with a bump stock inserted into it.

Dhingra allegedly informed Secret Service when they arrived to his home that he had been diagnosed with schizophrenia.

"According to the Bureau of Alcohol, Tobacco, Tobacco, Firearms and Explosives, this is the first case filed in Texas and what is believed to be the first nationwide involving illegal possession of bump stocks since the law was implemented in March 2019," the us Attorney's Office in Houston said in the statement.

The ban was ordered last year by the Trump administration following several mass shootings. The bump stock owners were either to turn in the devices or destroy them by the deadline.

Previous administrations had investigated but concluded they could not unilaterally ban bump stocks, saying Congress had to change the law. But the Trump administration did a re-think and concluded bump stocks were close enough to automatic rifles in functionality that they could be banned under existing laws restricting automatic rifle ownership, the Washington Times reported.

The devices came under national scrutiny after a gunman opened fire on a Las Vegas music festival in 2017, killing 58 people and injuring hundreds of others. Investigators determined that the man fired 1,100 rounds of ammunition from the 32nd-floor of a hotel with the help of a bump stock.

There have been a total of 38 mass killing by firearms in the US this year.

Firearms caused nearly 40,000 deaths in the US in 2017, which was highest in 50 years, according to official data.

On Monday, at least seven persons, including three officers, were killed and 20 injured when a gunman opened fire at random in the second mass shooting in the US State of Texas in a month.

The shooting occurred on Saturday in the West Texas cities of Midland and Odessa.

The shooting incident in the western Texas cities, located 32-km apart, happened nearly a month after a gunman killed 22 people and injured over two dozen at a Walmart store in El Paso in the far western part of the state.

According to a report in the Washington Post, public mass shootings are occurring more frequently in recent years, and they are claiming more lives.

Last year, there were eight mass shootings in the US – the most shootings in a single, recent year. But with six mass shootings so far in 2019, the country is on track to match or surpass last year's record, according to Lori Post, a Northwestern Medicine sociologist and epidemiologist who has been studying American mass shootings and massacre trends between 1982 and 2019.