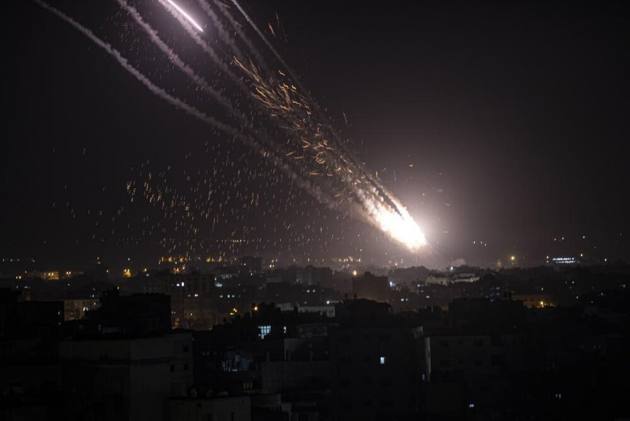 It is a one-sided battle between Israel and Hamas in the Gaza Strip. Rocket fire by Hamas may light up the night sky in a spectacular show of strength but this type of firepower makes no dent on the well-oiled sophisticated Israeli fighting machinery. Retaliation to Hamas’s rocket fire is both deadly and immediate.

Airstrikes by Israeli forces on buildings suspected to house Hamas commanders led to over 83 deaths, of them 16 are children. Around six Hamas commanders were killed in the bombings of residential complexes. The rockets launched by Hamas have taken about six lives in Israel, including that of an Indian nurse.  Israeli Prime Minister Benjamin Netanyahu is in a mood to escalate the military offensive and rejected all calls for a ceasefire called by the international community.

Israeli troops are being mobilised to go into the Gaza Strip. In short, the long-suffering people of Palestine, this time around Gaza are caught between a rock and a hard place. The Palestinian cause has further weakened with simmering differences between President Mahmoud Abbas and the Hamas leadership which controls the Gaza Strip. In the meanwhile, more and more Palestinian lands are being taken over by Israeli settlers with the backing of Netanyahu’s hard-line government.

Palestine's cause was once an emotive issue and supported by not just the Arab kingdoms and the Islamic world but many others who felt that the Palestinians were getting a raw deal. But over the years, more so after the death of the charismatic Yasser Arafat, the face of resistance, the Palestine cause lost resonance across the world. Even most Arab countries like Egypt, Saudi Arabia, UAE, Jordan, and many others lost interest.  Under Donald Trump's new deal for West Asia, the UAE and Israel decided to do shed past hostility and live as normal neighbours. Saudi Arabia's Crown Prince was likely to follow but the King put his foot down for the time being. But it is only a matter of time before Saudi Arabia follows UAE's lead.

India in the past had been a major champion of Palestine, as it was of all anti-colonial struggles across the world. India was the only non-Arab country to recognise the Palestine Liberation Organisation (PLO), headed by Yasser Arafat as the legitimate authority to represent the people of Palestine. The PLO was allowed to open an office in Delhi in 1975, and five years later this office was given full diplomatic status. India did not have full-fledged diplomatic ties with Israel till January 1992. This was during the Congress government of late prime minister Narasimha Rao.

However once the diplomatic ties were upgraded, India-Israel ties took off in a big way. The BJP has always had a soft corner for Israel and like the Congress government, the BJP too was quick to embrace Israel.

In the past, India had raised its voice consistently against injustice. Whether it was against apartheid in South Africa or the rights of Palestinians in West Asia. But that was in the past. Since 1991 economic reforms, India has made its policy more pragmatic. The idea now is to look out for your country and people and do not divert attention from that. Lip service to Palestine and belief in a two-nation solution is there, but in reality, New Delhi found it useful to engage at various levels with Israel.

Israel is now India’s second-largest supplier of arms, next to Russia. Besides defence equipment, Israeli technology in agriculture and other sectors is important. Intelligence sharing is also key. Israel is also a key manufacturer of high-tech products. All this is a definite plus for India.

For a long time, successive Indian governments tried to do a tight-rope walk between Israel and Palestine, making sure that a visiting dignitary to Tel Aviv would also go to Ramallah, capital of the Palestinian Authority. In 2017, Narendra Modi was the first Indian Prime Minister to visit Israel. It was a stand-alone trip and he did not stop by at Ramallah.

Gradually India’s ties with Palestine have weakened though Delhi continues to pay lip service to Palestinian rights.  When the UN Security Council met to discuss the crisis, India condemned all acts of violence “especially rocket attacks from Gaza” and called for an immediate de-escalation. That has raised a few eyebrows. The rocket attacks by Hamas killed 6 Israeli civilians while the airstrikes by Israel led to over 80 deaths, including serval children.