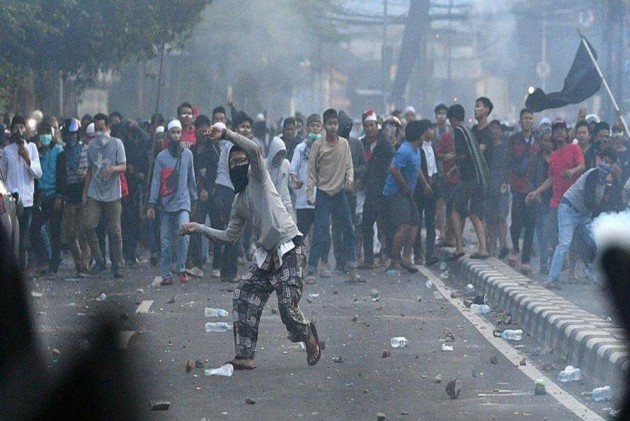 At least six people were killed and 200 others injured during protests in the Indonesian capital of Jakarta, against the re-election of President Joko Widodo for a second five-year term, authorities confirmed on Wednesday.

The police confirmed the death toll based on reports from hospitals. They said the cause of the deaths was being investigated, the BBC reported.

In the protests that began peacefully on Tuesday night after election results showed, that the incumbent President had beaten his long-time rival Prabowo Subianto, soon turned violent, after demonstrators who had gathered outside the headquarters of the Elections Supervisory Agency and the General Election Commission, burned several vehicles after the police tried to disperse them with tear gas.

Some 32,000 officers are guarding the headquarters of the two election bodies, with barbed wire and riot vehicles ahead of more potential protests on Wednesday.

The rioting in Jakarta was planned and not spontaneous, according to police.

Officers found an ambulance filled with stones and some of the dozens of people arrested had envelopes of money, said national police spokesman Muhammad Iqbal. Many of those arrested and come from outside Jakarta, he said.

Many residents have left the city, and parts of the downtown are closed to traffic with the election supervisory agency and Election Commission barricaded with razor wire.

"Some had gunshot wounds, some had blunt force wounds, but we still need to clarify this," he said, referring to the six dead, who are believed to have been killed overnight on Tuesday.

Authorities have said the protests were planned and "not spontaneous". They have suggested that a group of provocateurs may have been responsible for the violence.

"A majority of the protesters came from outside of Jakarta," said Muhammed Iqbal, a police spokesman.

The General Election Commission confirmed earlier on Tuesday, that Joko had won the presidency, taking 55.5 per cent of votes, that were cast during the April 14 polls.

Prabowo has rejected the results, alleging cheating, but the election commission has dismissed his claims, reports the BBC.

The former general also lost against Joko at the last election in 2014, and went on to unsuccessfully challenge the results.

Rudiantara, the communications and information technology minister, said features of social media including Facebook, Twitter and WhatsApp will be restricted on a temporary basis to prevent the spread of hoaxes and inflammatory content.

He said messaging systems will still work for text and voice messages but photos and videos will be blocked or slowed.

Authorities have also warned of possible terror attacks and have arrested dozens of radicals who were allegedly planning attacks during the demonstrations.