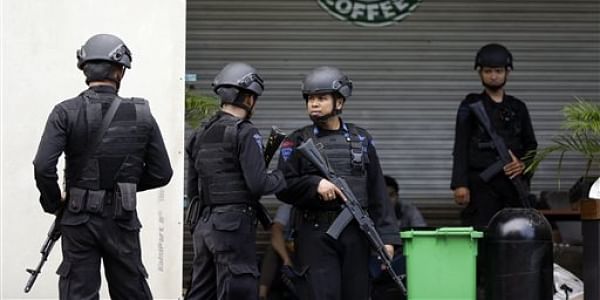 The body of Indonesia's most wanted militant with ties to the Islamic State group and a follower, who were killed in a jungle shootout with security forces, were evacuated early Sunday to a police hospital for further investigation, police said.

The two men were fatally shot by a joint team of military and police officers in Central Sulawesi province's mountainous Parigi Moutong district. It borders Poso district, considered an extremist hotbed in the province.

He said the bodies of Kalora and his follower have been evacuated to a police hospital in Palu, the provincial capital, after the rugged terrain and darkness hampered earlier evacuation efforts from the scene of the shootout in the forested village of Astina.

“We urged the other four wanted terrorists to immediately surrender and dare to take responsibility for their actions before the law,” said Sufahriadi, referring to remaining members of the East Indonesia Mujahideen who are still at large in the jungle on Sulawesi island.

The militant group pledged allegiance to the Islamic State in 2014, and Indonesia has intensified its security operations in the area in recent months to try to capture its members, particularly the leader, Kalora.

Two months ago, security forces killed two suspected members in a raid in the same mountainous district, several days after authorities claimed that Kalora and three group members planned to surrender. The surrender was reportedly cancelled after other members rejected the plan.

Kalora had eluded capture for more than a decade. He took over leadership of the group from Abu Wardah Santoso, who was killed by security forces in July 2016. Dozens of other leaders and members have been killed or captured since then, including a number of people from China's ethnic Uyghur minority who had joined the Santoso-led group.

In May, the militants killed four Christians in a village in Poso district, including one who was beheaded. Authorities said the attack was in revenge for the killings in March of two militants, including Santoso's son.

Santoso was wanted for running a radical training camp in Poso, where a Muslim-Christian conflict killed at least 1,000 people from 1998 to 2002. He was linked to a number of deadly attacks against police officers and Christians.

Indonesia, the world's most populous Muslim-majority nation, has kept up a crackdown on militants since bombings on the resort island of Bali in 2002 killed 202 people, mostly Western and Asian tourists.

Militant attacks on foreigners in Indonesia have been largely replaced in recent years by smaller, less deadly strikes targeting the government, mainly police and anti-terrorism forces, and people militants consider to be infidels, inspired by Islamic State group tactics abroad.