Residents along Indonesia’s Sunda Strait coast were warned on Monday to avoid beaches for at least two days for fear that volcanic activity could generate another powerful tsunami. 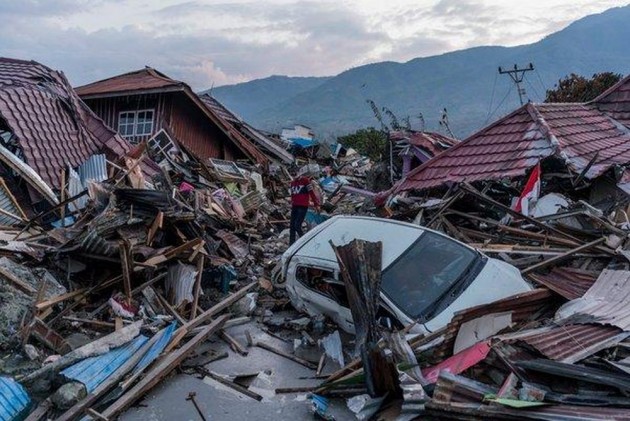 The death toll in a devastating tsunami that hit the coast of Indonesia after a volcanic eruption reached 373 on Monday, as rescuers continued digging through the rubble with bare hands and heavy machinery to find survivors amid warnings of more deadly waves in the coming days.

At least 128 people were still missing and nearly 1,500 were injured after the tsunami struck the Indonesian islands of Java and Sumatra almost without warning late Saturday, shortly after the Anak Krakatau volcano erupted in the Sunda Strait dividing the islands, said the National Board for Disaster Management (BNPB).

According to the figures released on Monday, at least 11,687 people were displaced by the tragedy, which damaged 611 houses, 69 hotels, 60 shops and 420 boats. President Joko Widodo visited the disaster zone to monitor rescue efforts and said he was praying for the victims, CNN reported.

Earthquakes To Tsunamis: Major Natural Disasters That Hit Indonesia Since 2004

Indonesia's Ministry of Maritime Affairs said the tsunami was triggered when the Anak Krakatau volcano erupted in the Sunda Strait, prompting a series of underwater landslides. Most of the victims were Indonesians, but foreigners were also visiting the affected areas ahead of Christmas.

"Sixty four hectares of the slope collapsed ... Our sensors did not sound early warning because they are for tectonic activity not volcanic activity," spokesman Rahmat Djamaluddin said.

According to local media reports, the wave reached as high as three metres (10 feet). Eyewitnesses described fleeing for their lives as beachfront homes were swept away in the wave.

"We are cautioning the people to remain cautious. Agencies are still continuing to analyze the root cause ... the Krakatau volcano continues to erupt, which could potentially trigger another tsunami."

Sutopo also raised the issue of Indonesia's outdated tsunami buoy network which he said hasn't worked properly since 2012. The country established the early warning system after the Indian Ocean tsunami struck on December 26, 2004, killing 226,000 people in 14 countries, including more than 120,000 in Indonesia.

This time, there was no warning from the sensors, said Indonesia's Meteorology, Climatology and Geophysics Agency head Dwikorita Karnawati.

A lack of warning was also blamed for the death toll in Indonesia's October tsunami which killed over 2,000 people on the western coast of Sulawesi.

Just over 20 minutes after the eruption, a wall of water between 6 and 10 feet high hit the coastline of northwestern Java and southeastern Sumatra, washing away everything in its path along the shoreline, including people, boats and cars. Pandeglang in northern Java's Banten province was the worst affected area.

Other hard-hit areas with casualties and damages were Serang, Lampung Selatan, Tanggamus and Pesawaran.

Footage shared on social media showed a large wave crashing into a tent in the Tanjung Lesung beach resort in west Java, where popular Indonesian rock band Seventeen was performing.

Members of the band were seen being swept away as the wave destroyed the stage.

Anak Krakatau had been spewing ash and lava for months, with plumes reaching hundreds of feet in the air in the weeks leading up to the tsunami.

The volcano's name means "Child of Krakatau", the island rising from the sea in 1927, after one of the largest, most devastating eruptions in recorded history occurred at the original Krakatau volcano in 1883.

That eruption, which caused the original volcano to collapse into the sea, killed over 36,000 people in far-reaching tsunamis and sent so much ash into the sky that global temperatures fell.

This tsunami has added more deaths and misery to a year of tragedies in Indonesia, a vast archipelago of more than 17,000 islands and 260 million people that lies on the "Ring of Fire", an area of great seismic and volcanic activity that is shaken every year by some 7,000 earthquakes.