'It was definitely one of the strangest things I've ever seen in my life,' one of the passengers said. 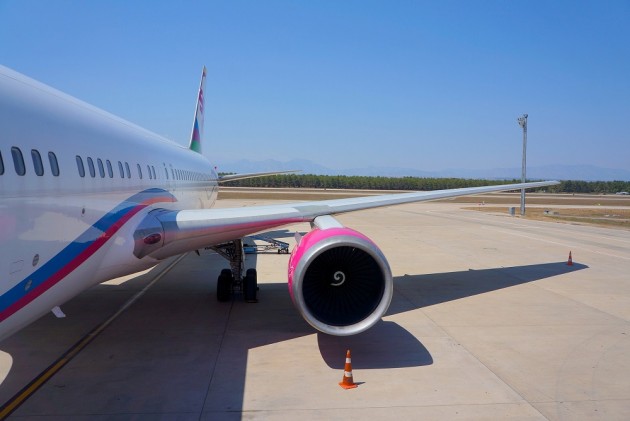 In an unusual incident, a 41-year-old man climbed onto the wing of a plane preparing to take off in Las Vegas, shocking passengers and authorities, US media reports said on Monday.

Police arrested Alejandro Carlson after he reportedly got onto the tarmac at McCarran International Airport, ran up to an Alaska Airlines plane and somehow climbed up one of the wings on Saturday, the Las Vegas Metropolitan Police Department said.

The man then moved about the wing for nearly 45 minutes before he fell onto the tarmac, Erin Evans, a passenger on the plane, told ABC News.

"It was definitely one of the strangest things I've ever seen in my life," Evans, from Vancouver, Washington, said.

Flight 1367 from Las Vegas to Portland was preparing for takeoff when the pilot noticed a person coming toward the aircraft and notified the control tower, Alaska Airlines said in a statement.

The man had hopped a perimeter fence and was observed by airport staff, CNN quoted airport spokesman Joe Rajchel as saying.

Evans filmed the incident and posted it on her Facebook page.

"Our first reaction was, 'Uhhh, who is this guy? Is this a terrorist type of activity?'" Evans said.

Air marshals inside the plane instructed passengers to remain in their seats as they and officers tried to get the man off the wing, she said.

After about 45 minutes, officers used emergency exits to get onto the wing and approached the suspect, according to Evans' video.

The man walked toward the very edge of the Boeing 737's wing and then removed his socks and shoes. As he tried to climb the winglet, the upturned end of the plane's wing, he slid off and fell onto the tarmac.

Police officers quickly took the intruder into custody. He was then taken to a medical facility, Rajchel said.

Evans said she and the other passengers watched the incident in shock.

The plane returned to the gate for a full inspection following the incident, the statement from Alaska Airlines said.

Carlson was treated for minor injuries at University Medical Center and booked into the Clark County Jail for trespassing and disregard for public safety, police said.

The investigation is ongoing, according to police.