India's External Affairs Minister Sushma Swaraj made a brief, unannounced stopover in Tehran on way to Bulgaria on February 16 to meet with the Iranian Deputy Foreign Minister Seyed Abbas Araghchi to discuss the bombings in their respective countries. 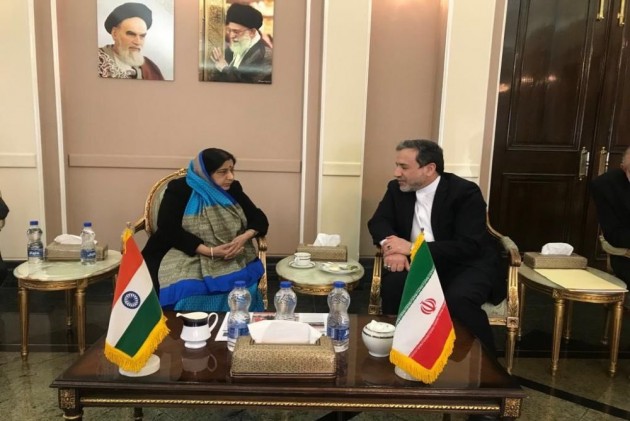 Iran has summoned the Pakistan envoy to protest a suicide attack that killed 27 of its elite Revolutionary Guards in the Sistan-Baluchistan, which straddles the border with Pakistan.

Foreign Ministry spokesman Bahram Ghasemi said on Sunday that Iran "explicitly conveyed" to Pakistan's ambassador Rafat Masoud that Tehran expects Islamabad and its military "to take serious and decisive action" against the Jaish al-Adl terror group and its base inside its territory, The News International reported.

Ghasemi also said that the foreign ministry asked Pakistan to take "immediate and necessary measures" to identify and arrest the attackers, who carried out Wednesday's bombing, which also left 13 Revolutionary Guard members injured.

Masoud took over her post as Pakistan's first female ambassador to Iran in August.

The diplomatic tension between Iran and Pakistan comes as India has also ratcheted up its diplomatic offensive against Islamabad over the killing of 40 paramilitary personnel in a deadly suicide bombing in Pulwama in Jammu and Kashmir on February 14. India has blamed Pakistan for sheltering the Jaish-e-Mohammad terror group that has claimed responsibility for the blast.

India's External Affairs Minister Sushma Swaraj made a brief, unannounced stopover  in Tehran on way to Bulgaria on February 16 to meet with the Iranian Deputy Foreign Minister Seyed Abbas Araghchi to discuss the bombings in their respective countries.

Both sides decided on close cooperation to combat terrorism in the region. "Enough is enough", tweeted Iranian Minister Araghchi.

Iran & India suffered from two heinous terrorist attacks in the past few days resulted in big casualties. Today in my meeting with Sushma Swaraj the Indian FM, when she had a stopover in Tehran, we agreed on close cooperation to combat terrorism in the region. Enough is enough! pic.twitter.com/uvwlx45pZ6

#India & #Iran deliver a stern message to #Pakistan when External Affairs Minister #SushmaSwaraj makes a brief stopover in #Tehran, days after both countries lost soldiers to attacks carried out by terrorists operating from Pakistani soil.

On Saturday, Major-General Mohammad-Ali Jafari of the Islamic Republic Guard Corps (IRGC) of Iran said that they would avenge the killing of the Revolutionary Guards.

When U.S., India, Afghanistan, & Iran all say similar things, shouldn’t Pakistanis at least think what it might be that they’re doing wrong ð¤ https://t.co/XlSDVBaxfv

IRNA quoted Jafari, as saying: “We will avenge their blood. If Pakistan doesn’t do its duties in fighting terrorism, Iran will fight the terrorist groups organised by regional and extra-regional intelligence services”. He was speaking on the sidelines of a ceremony to commemorate those killed in the attack.

He also slammed the government of Pakistan saying the country should not allow terrorists to use their border areas to organise anti-security moves against Iran.

“Inasmuch as the Government of Pakistan knows the location of these elements that are dangerous to Islam and should be accountable for the crimes the terrorist have committed, it is expected that they do their duty with seriousness and not allow the terrorists to use their border areas to organise anti-security moves against Iran,” he said.

Sharpening his attack, Jafari said: “If Pakistan doesn’t do its duties in this regard, Iran, based on the international laws, has the right to counter the adjacent threats in the neighboring countries and will punish the terrorists that are the mercenaries of regional and extra-regional intelligence services.”

Iran's parliament speaker Ali Larijani said in a strongly-worded statement that the Pakistan government should be held to account for the incident.

"The Pakistan government should be accountable for this act involving the group orchestrating and conducting the operation from their territory," Larijani said during Sunday's session of parliament.

Larijani said Pakistan "cannot act irresponsibly", adding that "such behaviour will severely damage the level of cooperation" between the neighbouring countries.

Speaking at an event in Hormozgan province on Sunday, President Hassan Rouhani also repeated his earlier threat to avenge the attack, saying he "regrets" the "wrong policies" of Iran's neighbours, without mentioning Pakistan.

Pakistan Foreign Minister Shah Mehmood Qureshi, denying the Iranian allegations of sponsoring terrorism, said his country has always condemned such activity. "Iran is our neighbour and we would never cause any problem for them," Qureshi said.

"We respect their sovereignty and territorial integrity and I'm sure they respect ours."

He said Pakistan would be "helpful" if Iran comes forward with any evidence. He recalled that Pakistan had cooperated with Iran in the past to "overcome these difficulties".