The ‘Islamic State-Khorasan’ group said it had fired six rockets. Operations at the Kabul airport continued ‘uninterrupted,’ the US said. 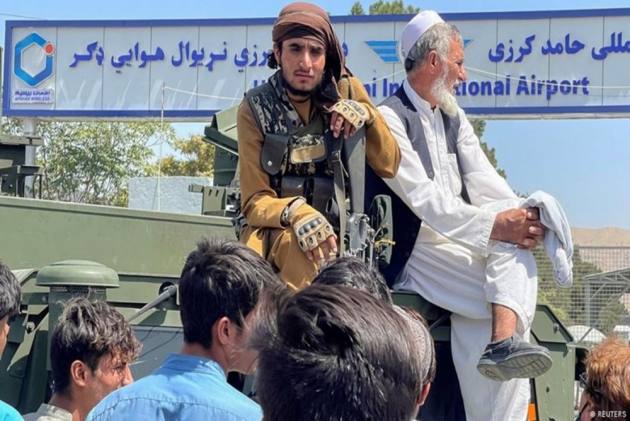 The Islamic State group's affiliate in Afghanistan has claimed responsibility for Monday's rocket attack in Kabul, saying it fired at least six Katyusha rockets at the airport in the Afghan capital.

The rockets stuck a neighbourhood close to the Kabul airport. The claim of responsibility was carried by the militant group's media arm, the Aamaq news agency. It didn't provide further details.

The U.S. military said five rockets targeted the airport on Monday morning and that U.S. forces on the airfield used a defensive system to intercept them.

US Failed In Afghanistan Because It Believed Pak Army While Dealing With Taliban, Says Ayesha Siddiqa

The attack did not halt the steady stream of U.S. military C-17 cargo jets taking off and landing at Hamid Karzai International Airport.

It was the latest attack by the militants. The Islamic State group launched a devastating suicide bombing Thursday at one of the airport gates that killed at least 169 Afghans and 13 U.S. service members.

In a statement on a Telegram channel, the IS-K group said that it had fired at least six Katyusha rockets targeting the Kabul airport.

The "Islamic State" affiliate in Afghanistan also said some people were injured in the attack.

A US official said earlier that US missile defense system had intercepted as many as five rockets. The official also said there were no US casualties or injuries.

A spokesperson for Germany's Interior Ministry said the German airlift from Kabul brought 138 local staff and their family members — a total of 634 people — to Germany.

There are at least 40,000 requests from people seeking to be flown out of Kabul, the spokesperson said.

Germany's foreign minister said on Monday that the operation to help these people out of Afghanistan had no specific "end-point."

"This is something that we will have to handle in the coming weeks and probably also months," he said during a visit to Uzbekistan.

What is the situation on the Uzbek border?

There are potentially tens of thousands of Afghans who would want to escape Afghanistan through Uzbekistan. DW correspondent in Tashkent Nick Connolly said that people in northern Afghan regions are especially more likely to seek this route as Uzbekistan is closer than Kabul — and to avoid Taliban checkpoints.

However, Uzbekistan has not been allowing everyone to enter. Mostly, people who already had visas, politicians, and people from the Uzbek ethnic minority in Afghanistan have been allowed entry, he added.

Germany is seeking to evacuate more people out of Kabul on charter flights. Still, the challenge of people even reaching the airport in Kabul remains, Connolly said, adding that another option was to ask Afghanistan's neighbors to open their land borders.

"But the Uzbek government is very very careful, and is worried, on one hand, of straining relations with the Taliban next door they they are going to have to work with. And secondly, of turning into, basically, essentially a refugee camp for Europe," he said.

The UN refugee agency (UNHCR) called for the protection of Afghans, whether they choose to stay in Amsterdam or seek to leave after the end of the evacuation mission.

"The airlifts out of Kabul will end in a matter of days, and the tragedy that has unfolded will no longer be as visible. But it will still be a daily reality for millions of Afghans," UNHCR chief said Filippo Grandi said in a statement.

"We must not turn away. A far greater humanitarian crisis is just beginning," he added.

Grandi called for humanitarian assistance to people in Afghanistan and urged countries to open their borders to Afghans seeking protection.

Borrell: EU has to 'draw lessons'

Borrell noted that the US managed to deploy more troops to Afghanistan as soon as security deteriorated, but the EU could not.

"We need to draw lessons from this experience... as Europeans we have not been able to send 6,000 soldiers around the Kabul airport to secure the area. The US has been, we haven't," he said.

"Afghans fleeing the country are not going to reach Rome in the first place, but maybe Tashkent. We need to help those countries that will be on the front line," he told the paper.

Rocket attack bears hallmark of IS

Swiss journalist Franz Marty, who is in Kabul, said the mode of Monday's rocket attack, using a rocket launcher hidden in a car, was typical of the methods used by the extremist IS group. He said the airport had been the apparent target.

Marty told DW that the airport in Kabul was now largely closed off and that only US passport-holders and military personnel were being allowed in.

US and allied forces are rushing to complete their own withdrawal by a Tuesday deadline agreed with the Taliban, the militant Islamist group that is set to rule Afghanistan.

Uzbekistan has said it will open its borders to people on a German list of those in danger from Taliban rule in Afghanistan, German Foreign Minister Heiko Maas has told journalists.

The list of people needing to be still evacuated includes German citizens, local Afghan support staff and other members of other groups such as human rights activists and journalists. The number of those identified runs into the tens of thousands.

Maas, who is in Uzbekistan to discuss the impact of the crisis in Afghanistan, also said that Russia and China need to be involved in talks on the future of the country.

Taliban criticize US for attack

A Taliban spokesman has criticized the United States for carrying out Sunday's attack in Kabul without informing the Taliban first.

Zabihullah Mujahid told China's state television CGTN that it was unlawful for the US to stage attacks in other countries at will. He said seven people had been killed in the attack, including civilians.

The Russian Embassy in Kabul has said Russian citizens and residents, along with nationals of countries that are members of the Collective Security Treaty Organization — a post-Soviet security bloc — can still apply to leave Afghanistan on additional evacuation flights.

Russia flew out about 360 people from Afghanistan last week.

White House statement on rocket attacks at the airport

In a statement issued early Monday, White House Press Secretary Jen Psaki said President Biden had "reconfirmed his order that commanders redouble efforts" to protect US forces on the ground.

Rockets were launched at Kabul airport early on Monday, several media agencies have reported. It wasn't immediately clear who launched the projectiles.

AFP said the airport's missile defense system was activated in response to the rocket fire, according to reporters on the ground.

A US official said that as many as five rockets were shot off towards Kabul airport, but they were intercepted by the US missile defense system. The official said there were no indication of US casualties from the rockets so far.

German Foreign Minister Heiko Maas landed in Tashkent, Uzbekistan, to discuss the impact of the ongoing crisis in Afghanistan. Later on Monday, Maas will go to Dushanbe in Tajikistan for talks.

All three countries border Afghanistan and are destinations for Afghan refugees. Maas has pledged the three border countries humanitarian and economic aid.

US military looking into reports of airstrike casualties

The Pentagon acknowledged reports of civilian casualties from a US drone strike in Kabul on Sunday, according to a statement from US Central Command spokesperson Bill Urban.

"We are aware of reports of civilian casualties following our strike on a vehicle in Kabul today," Urban said, while adding the Pentagon is still assessing the results of the strike.

"We know that there were substantial and powerful subsequent explosions resulting from the destruction of the vehicle, indicating a large amount of explosive material inside that may have caused additional casualties," he continued.

"We would be deeply saddened by any potential loss of innocent life," Urban said.

Afghan broadcaster ToloNews reported that at least 10 civilians were killed in the strike.

The Pentagon said the strike targeted an "imminent" suicide bomb threat from several members of the "Islamic State-Khorasan" IS-K group. The bombers were reportedly planning to target Kabul airport, where the US military is conducting an ongoing evacuation mission.

IS-K claimed responsibility for a deadly Kabul airport bombing that killed US troops earlier in the week.

Foreign ministers from several countries will meet virtually on Monday to discuss their plans for Afghanistan, the US State Department has announced.

"The participants will discuss an aligned approach for the days and weeks ahead," the statement said.

The statement also said US Secretary of State Antony Blinken would speak after the meeting to give an update on the US' recent efforts in Afghanistan.

In a televised debate, the three candidates to succeed Chancellor Angela Merkel in Germany's election touched on events in Afghanistan.

Armin Laschet for Merkel’s center-right Christian Democratic Union (CDU) described what happened as "a disaster for the West, also a disaster for the German government" and renewed a call for a "national security council'' to improve decision-making in Germany.

Annalena Baerbock for the environmentalist Greens accused the government of "ducking away'' from decisions on assisting endangered Afghans out of the country.

Olaf Scholz for the center-left Social Democratic Party (SPD) said the Left Party's refusal to support the military evacuation mission from Kabul "greatly saddened'' him and insisted that any government he leads must have "a clear commitment to NATO.''

On Sunday, the US military carried out an attack on "multiple

'IS-K' suicide bombers," according to officials. A drone strike blew up their vehicle before they could attack the ongoing evacuation at Kabul's international airport.

The Taliban has said it will let all foreigners and locals with travel authorization leave before the scheduled US withdrawal on Tuesday.