Dhaka Wants UN To Call Out Pak For 1971 Genocide. Will India Support It?

Prime Ministers Narendra Modi and Sheikh Hasina reiterated the close bonds between the two neighbours at a virtual summit Thursday, but some irritants still remain. 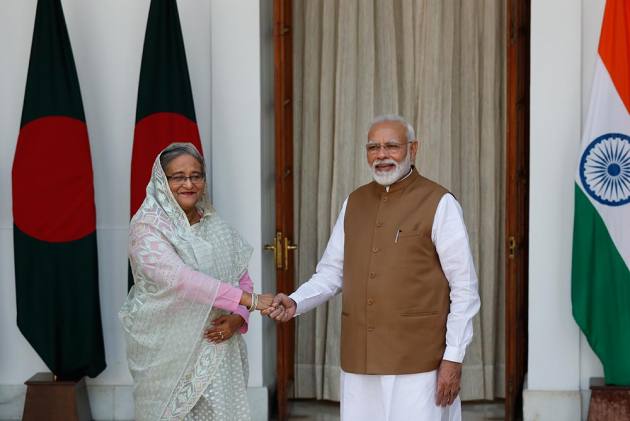 Prime Minister Narendra Modi and Bangladesh’s Sheikh Hasina held a virtual summit on Thursday as the year-long celebrations to mark 50-years of independence next year, kicked off in Dhaka earlier this month. It will culminate in a grand ceremony which will be attended by the Indian the Prime Minister.  So, it was natural for both leaders to make frequent references to the 1971 war of independence, where the Indian army fought side by side with the Mukti Bahini.

Bangladesh has approached the UN to recognize the genocide committed by Pakistan and hold it responsible. There is a long-standing demand from the people of Bangladesh to ask the UN to globally observe March 25 as National Genocide Remembrance Day. This effort will gain momentum next year.

Prime Minister Sheikh Hasina had recently said that she cannot forget or forgive what had been done by the Pakistani army to her people. At the special briefing on today’s summit, joint secretary Smita Pant in charge of Bangladesh and Myanmar was asked for India’s reaction to this and whether India would jointly raise the matter with Dhaka. "Well, there is no denying that state oppression against Bangladesh’s just war led to the death of three million people, rape and torture of 200,000 women. We deeply respect and understand the sentiments expressed by Prime Minister Sheikh Hasina’’, said Pant.

Though officially Delhi has not said much, it is likely that India would support Bangladesh's efforts. With India becoming a non-permanent member of the United Nations Security Council (UNSC) from January, it is likely to do the diplomatic spadework for the move. This issue did not come up at the summit today.

Modi and Sheikh Hasina reiterated the close bonds between the two neighbours and pledged to carry forward the traditional ties.

Ever since Sheikh Hasina came to power in Dhaka, ties between the two neighbours have improved by leaps and bounds, making Bangladesh one of India’s closest friends in South Asia. Yet there are headwinds facing the relations. One is China’s concerted move to spread its wings in India’s neighbourhood including Bangladesh. The other is the ruling BJP’s domestic agenda, which triggers widespread concern in Bangladesh. With elections slated for next year in both West Bengal and Assam, the rhetoric is expected to be more heated. How far Prime Minister Modi and the Ministry of External Affairs is able to insulate the domestic rhetoric from affecting political ties with Dhaka remains to be seen. New Delhi is constantly assuring Bangladesh that the National Register of Citizens (NRC) and the Citizenship Amendment Act is not aimed at Bangladesh. But the fact remains that the alleged illegal foreign nationals in India are all said to be Bengali speaking Muslims presumed to have come illegally from Bangladesh.

India is keen to ensure that its close political ties with Bangladesh do not fall prey to a third country. Prime Minister Modi went out of his way to talk about his personal commitment fostering ties. "Bangladesh is a major pillar of our Neighbourhood First policy. Strengthening and deepening relations with Bangladesh has been a special priority to me since day one,’’ he said in his opening remarks at the summit.

India and Bangladesh have together launched a postal stamp marking the birth centenary of Bangabandhu Sheikh Mujibur Rahman, and inaugurated Bangabandhu-Bapu Digital Museum, which highlights the lives and activities of the founders of Bangladesh and India. A biopic on Sheikh Mujibur Rahman will be made by India’s ace film director Shyam Benegal. Shooting of the film will begin next year.

Delhi and Dhaka have been in frequent touch following the Covid-19 pandemic. India was alarmed when China stepped up its efforts at helping Bangladesh during this time. Beijing sent a team of doctors to Dhaka and has tied up with one of its major institutes in the field trial of a  Chinese vaccine.  "We are also having good cooperation in the field of vaccine. In this regard, we also take special care of your needs,’’ the PM pointed out in his opening remarks. At the briefing later Smita Pant in reply to a question said that India will give "high priority’’ to getting the vaccine supplied to Bangladesh once it begins to roll out the vaccine here.

In her remarks, Prime Minister Sheikh Hasina said: "We happily recognise the growing mutual dependency of the economies of Bangladesh and India. A good number of Indian nationals are employed in the manufacturing and service sector of Bangladesh and are remittance earners for India. On the other hand, India receives its highest number of tourists and medical patients from Bangladesh." To be noted is the fact that she emphasised how India too profits from Bangladesh.

Seven MoUs, as well as a framework agreement on high impact community development projects, was signed at today’s summit. These include cooperation in agriculture, protocol on trans-boundary elephant conservation; supply of equipment and improvement of garbage/solid waste disposal ground in Barishal City Corporation; cooperation between Father of the Nation Bangabandhu Sheikh Mujibur Rahman Museum, Dhaka, and the national museum in New Delhi. Terms of reference of India-Bangladesh CEOs Forum; and framework understanding on cooperation in the Hydrocarbon sector were also signed.

The joint statement released at the end of the summit noted that "relations between  Bangladesh and India are based on fraternal ties and reflective of an all-encompassing partnership based on sovereignty, equality, trust and understanding that transcends a strategic partnership.’’ The statement noted that:  They paid solemn tribute to the martyrs of the Liberation War of Bangladesh, the Muktijoddhas and the Indian soldiers, for their great sacrifices in 1971. They vowed to uphold and protect the cherished values of democracy and equality in line with the aspirations of the people of the two friendly countries.’’