Despite opposition from conservatives and snowballing tabloid reports of financial scandal, Princess Mako will marry commoner Kei Komuro in a subdued wedding ritual. 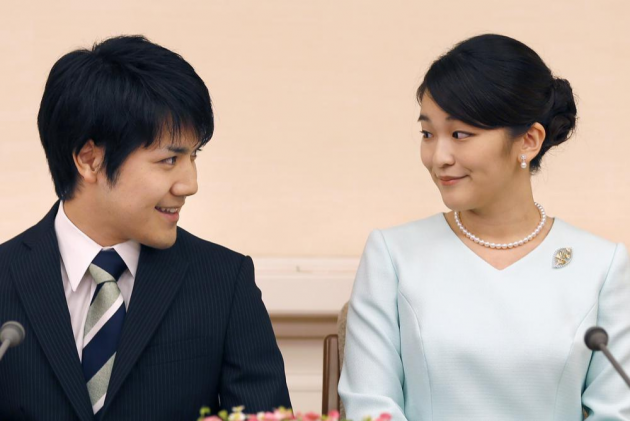 Hours before Japan's Princess Mako is due to marry her commoner fiance, Kei Komuro, there is little indication of the public or the domestic press relenting their criticism of the first imperial family wedding in nearly 30 years.

An unforgettable day of traditional pomp and finery will instead be reduced to the signing of paperwork and a press conference.

The princess, who turned 30 on Saturday, will on Tuesday morning complete the procedures to register her marriage to Komuro, also 30, whom she first met more than a decade ago at Tokyo's International Christian University.

As well as confirming the marriage, the paperwork will mean that, under Japanese law, the princess is no longer a member of the imperial family. She will move out of the palace and into a private apartment to commence a new life.

It will be a bitter-sweet moment for the princess, who has grown up within the cloistered world of the imperial palace in Tokyo, arguably made more difficult by the unrelenting attention of the Japanese tabloid media.

Though there was widespread joy for the princess and her boyfriend when their engagement was initially announced in September 2017, that has since soured.

Within weeks of the wedding being set for November 2018, the Shukan Josei weekly magazine ran a story claiming that Komuro's mother was in a dispute with a former boyfriend over money.

According to the report, Komuro's mother — who had fallen on hard times after her husband committed suicide — had borrowed 4 million yen (€30,205, $35,110) from the man to cover the costs of Komuro's university education.

Komuro's mother and her former partner were in dispute over whether the money was a gift or a loan that needed to be returned.

The Imperial Household Agency — consistently averse to the slightest whiff of scandal — quickly announced that the wedding was being delayed.

Undeterred, the press pack stepped up their reporting of the affairs of the Komuro family, leading to suggestions in different magazines that he had enjoyed a string of relationships at university and that his family were descendants of Korean immigrants.

In part to escape the media attention, Komuro moved to the US in 2018 to study law at Fordham University in New York. He stayed in touch with the princess, and in September kept his promise to return and marry her.

Any hopes that they might be able to quietly go ahead with the wedding have been dashed after media reports emerged in recent weeks claiming that the wedding poses the biggest threat to the stability of the imperial family in a century.

Media reports also claimed Komuro would not be able to earn a sufficient wage to support the former princess and that his family is primarily motivated by the potential financial and social windfalls that will result from the union.

This weekend's coverage has focused on the amount that the Komuro family is costing the Japanese taxpayer, with claims that the government has promised Komuro's New York law firm lucrative contracts to ensure that the princess is financially cared for.

Another magazine has questioned the cost of 24-hour security outside the apartment of Komuro's mother, in the western suburbs of Tokyo.

The impending wedding has even led to unprecedented protest marches in Tokyo, made up largely of conservatives and middle-aged persons who feel so strongly about the marriage that they are brandishing placards that read "Stop the Cursed Marriage" and "No, Komuro."

"I cannot say that I am at all excited about the events that will take place tomorrow," said Yoichi Shimada, an academic and staunch supporter of Japan's monarchy.

"It is my feeling that the Komuro family has failed to show that he is the right person for the princess or to be a part of the imperial family, even if they will remain commoners outside the monarchy," he told DW.

"I think that most Japanese people were happy when the news was first announced, but there has been very little good news since then and a lot of negative reports about Komuro and his family," he added.

"We all know that the life of an international lawyer in New York is very challenging and competitive so I worry that he will be up to that task, although I have heard from my contacts in the Japanese government that Tokyo will be using Komuro's law firm to ensure that he is a success and can earn a living," Shimada said.

"But that is special treatment paid for by Japanese taxpayers, and that cannot be considered a good thing."

Despite the seemingly broad hostility to the union, there are some who still wish the couple well.

Yae Oono, a homemaker from Tokyo, says the couple have been affected by "too much negative coverage."

"I see a young couple who say they have been in love — and still love each other despite being apart for three years — and I hope they are able to put this behind them.

"The media has not been kind to them and I am not surprised that they will be moving to New York soon after the wedding," she said. "I guess they hope to just become 'normal' people in the US."

Before that, there are a few more hurdles to overcome. After the princess officially becomes a commoner on Tuesday morning, the couple are scheduled to give a press conference at 2 p.m. local time.

Once again, they will be in the full glare of the tabloid media and their every word will be scrutinized over until they can make a final bow to the press pack and depart for a new life.