An impersonator of North Korea's leader Kim Jong-un on Monday said Vietnamese authorities were deporting him from the country, just 24 hours before Pyongyang's leader was expected to arrive here ahead of his summit with US President Donald Trump. 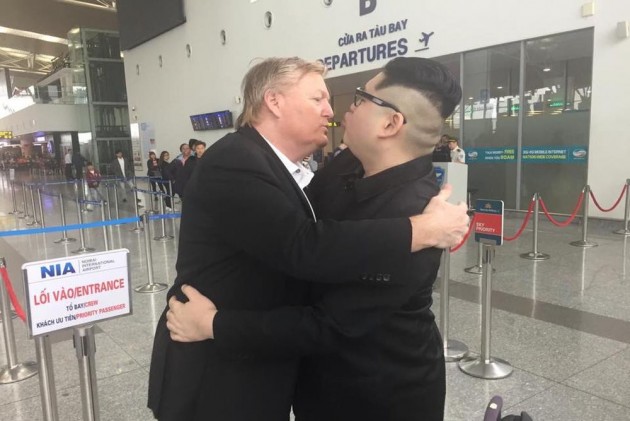 North Korea's leader Kim Jong-un's impersonator Howard X on Monday said Vietnamese authorities were deporting him from the country, just 24 hours before Pyongyang's leader was expected to arrive here ahead of his summit with US President Donald Trump.

In a Facebook post, the comedian known as Howard X said three officers had escorted him to the airport in the capital, where he boarded a Singapore-bound Vietnam Airlines flight, reports Efe news.

The comedian, who is a resident of Hong Kong, was detained on Friday, where authorities told him that his visa was "invalid".

"My real crime was looking like the President of North Korea," the comedian said, who also published a photograph of him bidding farewell to Russell White, a Trump impersonator, whom the local authorities have allowed to remain in the country for several more days but have barred him from any public performances.

The pair kissed and hugged as they said their goodbyes at a hotel in Hanoi on Monday before Howard X was escorted to the airport.

Kim is expected to arrive on Monday or Tuesday for a state visit before the summit with Trump on Wednesday and Thursday.

In the first visit by a North Korean leader to Vietnam since the reunification of the Southeast Asian country in 1975, Kim will meet President and General Secretary of the Communist Party, Nguyen Phu Trong.

Howard X and White also made headlines in the run-up to the first summit in Singapore last June.

The comedian had said that Singaporean authorities had briefly detained him at the airport upon his arrival, but he was allowed to remain for the duration of the summit.