The Kisan Mahapanchayat will be a historic event with at least 15 to 20 lakh participants, claimed Samyukta Kisan Morcha (SKM) protesting the Centre’s three agriculture reform laws. 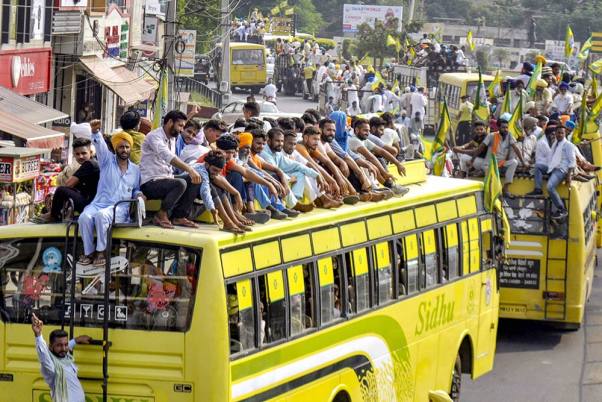 Farmer leaders protesting the Centre’s three agriculture reform laws claim that Sunday, September 5, will “witness the largest gathering of farmers ever in the world”.

A “Kisan Mahapanchayat” has been organised in Muzaffarnagar, Uttar Pradesh – about 130 km north of Delhi – by the joint platform of farmer unions, Samyukta Kisan Morcha (SKM).

“It will be a historic event with at least 15 to 20 lakh participants,” claimed Abhimanyu Kohar of SKM.

“Since the last 10 days, our teams have been visiting 13 to 14 villages each day to invite farmers to this Mahapanchayat. Every village will send at least five vehicles full of peasants,” added the 28-year-old national coordinator of Rashtriya Kisan Mahasangh (RKM) in his address.

According to the SKM, the Kisan Mahapanchayat will inaugurate “Mission Uttar Pradesh”. SKM leaders earlier held a series of meetings in Uttar Pradesh, Uttarakhand, Punjab, Haryana, Rajasthan, and Madhya Pradesh to mobilise support.

Assembly elections are expected in Uttar Pradesh, Uttarakhand, and Punjab early next year. Rajasthan and Madhya Pradesh go to polls in 2023.

“I have always said this is all a political campaign in the garb of farmer protest,” added Chahar, Member of Parliament from Fatehpur Sikri, Uttar Pradesh.SKM leaders visited states like West Bengal where assembly elections were held earlier this year to seek mandate against BJP candidates. However, they maintain that they do not seek votes in favour of any party.

“SKM is not a political party so there is no question of it participating in the political process,” stated Hannan Mollah, General Secretary, All India Kisan Sabha (AIKS).

The Left-affiliated AIKS is also a part of the SKM. About 500 AIKS members from Bihar arrived at the Gazipur protest site at Delhi’s border on September 1. This group will stay with other protestors for a week in a show of solidarity.

Similarly, a contingent of protestors have also arrived from Maharashtra this month. Groups of peasants have been visiting the sit-in protest sites at Delhi’s borders on rotation to keep the numbers, and morale, high.

“The united farmers’ movement will ensure that the sinister conspiracies and repressive BJP government will be given a fitting rebuff even electorally in the forthcoming assembly elections,” he added.

There were reports that the RSS-affiliated farmers’ union – Bhartiya Kisan Sangh (BKS) – will hold nationwide protests on September 8. The BKS does not seek a repeal of the three laws and is not part of the SKM agitation. However, it had sought certain assurances to be included in favour of farmers.

The BKS’ scheduled protest is said to be against the Centre’s lack of assurance despite an ultimatum on considering certain demands regarding the farm laws and the minimum support price (MSP) by August 31.

The government has repeatedly asserted that the three agriculture laws would bring revolutionary changes in the lives of farmers. It has also been made clear that further negotiations will be held only if the farmer unions drop their demand of a repeal of these laws.

Thousands of farmers have been camping at Delhi's borders since November 2020, demanding total roll back of the laws.

Their demands include framing laws to guarantee minimum support price for crops.

SKM has also given a call for a nationwide strike on September 25. Various trade unions and some political parties have also extended their support.