'Literally A Pipe Organ For China': Donald Trump's Fresh Salvo On WHO

Donald Trump has launched an investigation into the WHO's role in the spread of coronavirus and have accused it of siding with China during the pandemic. Pending an investigation, the President has stopped US aid to the WHO. 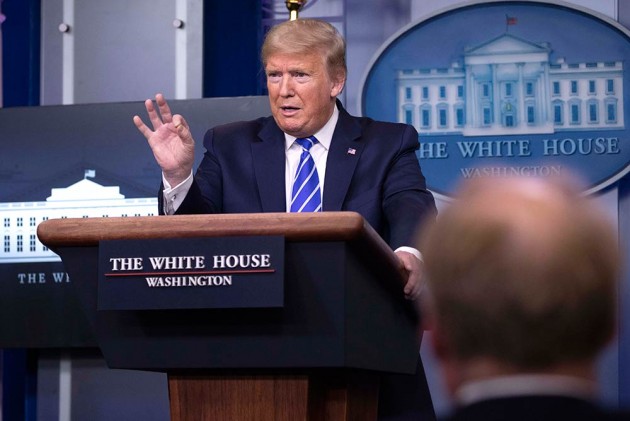 President Donald Trump Wednesday termed the World Health Organization "literally a pipe organ for China" and said the United States will soon come out with its recommendations on the global body, followed by one on Beijing.

"They misled us," he said of the WHO on the coronavirus outbreak.

"We will have a recommendation pretty soon but we are not happy with the World Health Organization," Trump told reporters at his Oval Office of the White House.

Trump has launched an investigation into the WHO's role in the spread of coronavirus and have accused it of siding with China during the pandemic. Pending an investigation, the President has stopped US aid to the WHO.

The investigation would look into the role of China and as to how coronavirus spread from its Wuhan city.

"On world health with China to follow," Trump said when asked to clarity about his comment on recommendation. "On the World Health Organization or a recommendation on China or what do you mean?" he was asked.

"What are you hoping to learn about China and the World Health Organization with this investigation you have commissioned with the intelligence agencies?" he was asked.

"It is coming in and I am getting pieces already and we are not happy about it and we are by far the largest contributor to WHO,...and they misled us. I don't know. They must have known more than they knew because they came after what other people knew that weren't even involved," Trump said.

Responding to a question, the President said that there are lots of different people whom the US can give this money to.

"We can give this money to lots of different incredible groups. There are a lot of groups out there. It doesn't have to go to the WHO. We can give it to groups that are very worthy and get much more bang for your buck, but we're going to make a decision in the not-too-distant future," Trump said.

"You talk about stopping the spread or stopping the embers that could have been stopped there. And then why did China allow planes to fly out but not into China," he said.

As such Trump said his Administration is "coming up with a very distinct recommendation". There is nothing positive about what happened in China having to do with this subject, he said reiterating that China could have stopped the virus at the source.

"They didn't have to let airplanes fly out and loads of people come out and we are lucky," he said.

Trump had banned flights from China in the last week of January.