New daily infections breached 10,000 on July 13 for the first time and have stayed there since, despite a virus emergency in January and a lockdown since June 1 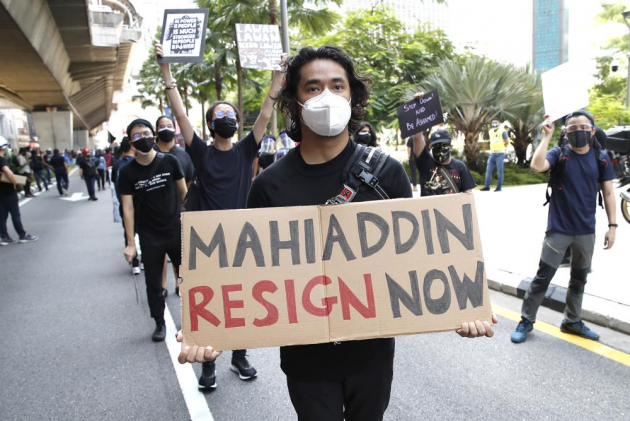 Hundreds of black-clad Malaysian youth rallied Saturday in central Kuala Lumpur to demand the resignation of the prime minister over his handling of the coronavirus pandemic, as new cases soared in a surge that has also become a political crisis.

Public anger against Muhyiddin Yassin's unelected government, which took power in March 2020 after forming a coalition with the opposition, has built up as cases jumped eightfold since January. New daily infections breached 10,000 on July 13 for the first time and have stayed there since, despite a virus emergency in January and a lockdown since June 1. Total deaths have risen to nearly 9,000. Nearly 20% of the population has been fully vaccinated.

The rally added to pressure on Muhyiddin, after his government was reprimanded by Malaysia's king for misleading Parliament over the status of emergency measures.

Muhyiddin obtained royal consent to declare the emergency in January, allowing him to suspend Parliament and rule by ordinance without legislative approval until Aug. 1. Critics have slammed the emergency as a ruse for Muhyiddin to cling to power at a time when his razor-thin majority in Parliament is in jeopardy.

After police blocked them from marching to Independence Square, they sat on the street a meter (3 feet) apart with a large banner that read “The government failed."

They put forward three demands: the resignation of Muhyiddin, resumption of regular parliamentary sessions and automatic loan moratorium to help those hit by the pandemic. They dispersed peacefully after nearly two hours.

Parliament reopened Monday for the first time this year after Muhyiddin caved to pressure from the king, but it was only to brief lawmakers on the pandemic and debates were banned.

King Sultan Abdullah Sultan Abdullah on Thursday rebuked the government for misleading Parliament on the annulment of emergency ordinances, but Muhyiddin insisted his administration didn't violate the constitution.

The king said he he didn't give his consent to the annulment and had told the government to table the matter for a debate in Parliament - which may lead to a vote that could test Muhyiddin's majority. Muhyiddin said that the king has to act on the Cabinet's advice.

The public showdown has sparked a constitutional crisis and weakened Muhyiddin's position as lawmakers accused the government of treason. The biggest party in his ruling alliance has backed calls for Muhyiddin to quit.

Parliament has been adjourned until Monday but it's unclear if a no-confidence vote against Muhyiddin will be allowed.