The raging Australian bushfires, one of the worst in its history, have killed at least 26 people, burned over 10 million hectares of land, destroyed over 2,000 homes and pushed many species towards extinction. 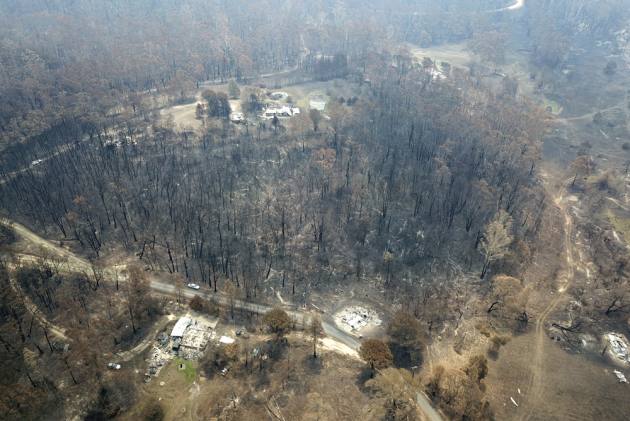 The air quality in Melbourne deteriorated to the "worst in the world" on Tuesday as smoke from the massive bushfires engulfed Australia's second biggest city with authorities issuing health warnings advising people to stay indoors and take precautionary measures.

The raging Australian bushfires, one of the worst in its history, has killed at least 26 people, burned over 10 million hectares of land, destroyed over 2,000 homes and pushed many species towards extinction.

Meanwhile, the Bureau of Meteorology has forecast rains through the week, bringing some relief to the bushfire affected communities and the firefighters.

According to report in the Australian Broadcasting Corporation (ABC), widespread rainfall is expected for the east coast of the country, including the firegrounds, starting Tuesday and lasting into the weekend.

Melbourne's air quality went down overnight to "hazardous" due to bushfire smoke as the smoke from Victoria state engulfed it. 16 fires were still burning and 1.4 million hectares have been destroyed across Victoria.

It is the second biggest city in Australia after Sydney with a population of over 4.2 million.

"I think overnight for Melbourne it did reach the worst in the world," Victoria's chief health officer Brett Sutton said.

He warned that people might experience a worsening cough and a dry nose and throat.

"For those vulnerable groups - over 65s, under 15s, pregnant women and people with existing lung/heart disease or diabetes - we are saying avoid exposure to the smoke by staying indoors and limiting physical activity," he said.

While heart and respiratory patients were being told to keep safe, the healthy were being warned to stay inside.

According to the Environmental Protection Authority's AirWatch website, the air quality in Melbourne was "very poor'' and visibility down to 900 metres in some parts of inner Melbourne on Tuesday.

The entire state was choking under a blanket of bushfire smoke, including Geelong town, the Latrobe Valley, Central Victoria, Gippsland and the North Central regions, considered to have "hazardous" air quality at 7 am (local time).

In Melbourne's Central Business District (CBD), the smoke was measured at "hazardous" levels between 12 am and 4 am (local time).

Sutton said people in East Gippsland and the state's north-east, where poor to hazardous air quality is likely to remain for some time, should try to let fresh air into their homes when possible.

"When conditions are good … that's the time to open doors and windows to air your house, to get the smoke out and then when the air quality's poor, close doors and windows, stay inside, minimise your activity," he said.

With 30 per cent of their habitat already been destroyed in the devastating bushfires, Koalas -- the herbivorous marsupial animal native to Australia -- have become a big focus for the Australian government.

The ongoing blaze is also believed to have killed approximately half of the Koala population in the Kangaroo Island, described as Australia's Galapagos Islands.