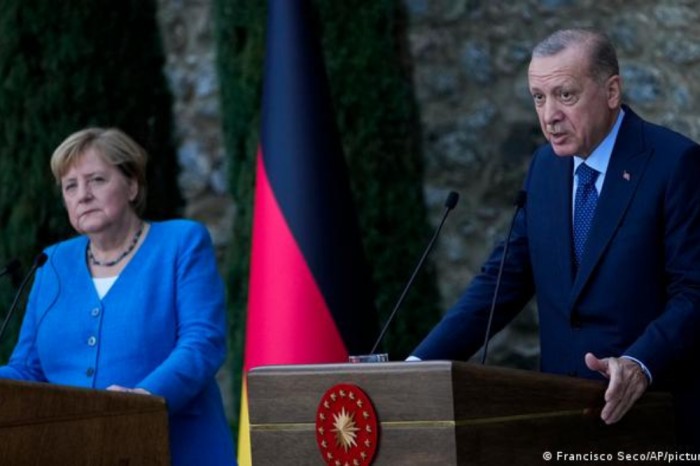 In a joint press conference held after talks between the leaders, Erdogan said he hoped there would be a good working relationship with the future German government.

Erdogan said that Merkel had always maintained a "reasonable and solution-oriented approach."

The Turkish president said he wanted cooperation between the two countries to continue. "I wish any new government and its chancellor every success," Erdogan said.

German government spokesperson Steffen Seibert posted on Twitter that the leaders met in the historic Tarabya district on the Bosphorus.

What did talks focus on?

The key talking points between Merkel and Erdogan included Ankara's refugee agreement with the EU.

Turkey plays a key role in accepting refugees and managing migratory flows to the European Union. The country has already taken in around 3.7 million people from Syria and hundreds of thousands from other countries, such as Afghanistan.

Merkel is co-architect of the European Union's refugee pact with Turkey, which gives the Ankara government financial support in return for limiting the number of asylum-seekers and migrants who cross the Aegean Sea into EU territory.

Merkel also called on the Turkish president to cooperate in dealing with the Taliban in Afghanistan to help prevent another refugee crisis.

Since the Taliban retook control of Afghanistan, there have been concerns that tens of thousands of people will flee the war-ravaged country and try to enter Europe by traversing through Turkey.

The EU wants to pay Turkey another €3 billion ($3.5 billion), which could be used to support Afghans escaping the Taliban. But Erdogan has repeatedly emphasized that his country would not accept any more refugees.

German-Turkish ties on the mend

Relations between Turkey and Germany have been turbulent in recent years.

In 2017 in particular, the imprisonment of German citizens put heavy strain on the relationship between Berlin and Ankara.

This was one of the talking points between the two leaders, with Merkel saying: "We sometimes have very different views on when the terrorism charge applies."

Some of those imprisoned in Turkish jails have supported Kurdish movements, which Turkey classifies as terrorist organizations.

It's likely that the prosecution of German citizens and Turkish opposition members will remain a point of contention.

On Tuesday, a German of Kurdish origin was sentenced to more than two years in prison in Turkey for terrorist propaganda.

As in many other cases, the background was critical posts on social media.