Mexico: at least 53 people from Central America were killed in when the truck they were in overturned. The deceased were covered in white shrouds and laid out at the crash site side by side. 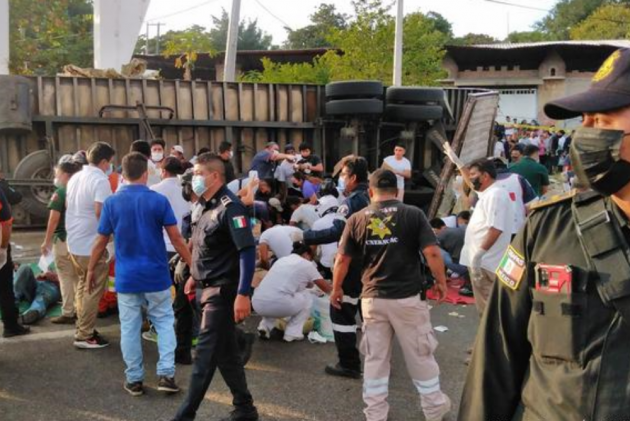 At least 53 migrants from Central America were killed Thursday in Chiapas state, southern Mexico when a truck flipped. Most of those deaths were reported to have been migrants tucked in the trailer of the truck hoping for a new life in the US.

Luis Manuel Garcia, the head of the Chiapas civil protection agency told Reuters news agency the truck crashed on a sharp curve on the highway between the city of Chiapa de Corzo and the state capital of Tuxtla Gutierrez.

"According to the statements of the survivors, most of them are from Guatemala," he said.

The civil protection services in Chiapas said 58 other people were injured in the accident, with men, women and children among the victims.

Images from the crash site show a white trailer on its side on the highway as victims are scattered about on tarps as they receive medical attention.

In one video broadcast on social media, a woman holds her weeping child in her lap while both are covered in blood. Another video shows a man in the trailer after the wreck curled up and unable to move as rescue crews worked to assist him.

Chiapas Governor Rutilio Escandon tweeted his solidarity with the victims and said he instructed rescue crews to the scene.

What is the reaction to the crash?

After the collision, Celso Pacheco of Guatemala said the truck felt like it was going too fast before it lost control. Pacheco said the people were from Guatemala and Honduras and estimated there were nearly a dozen young children inside.

Each year, hundreds of thousands try to reach the US via Mexico from Mexico itself or Guatemala, Honduras, El Salvador in Central America and elsewhere. Most of these migrants are transported in truck trailers operated by human traffickers.