On January 16, the climber was part of one of the two Nepali teams that converged a mere 10 metres ahead of the 28,251-foot mountain's peak. 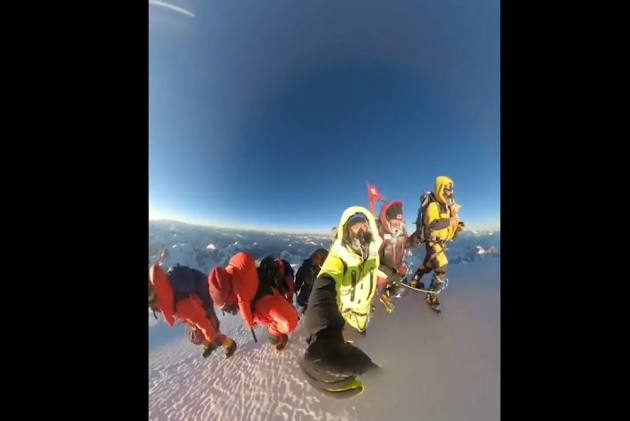 When it comes to climber Nirmal Purja, no mountain seems to be high enough. In a record climb, the mountaineer along with two Nepalese teams trudged forth atop the Mount K2 in the harsh winter season.

On January 16, the two teams converged 10 metres ahead of the 28,250-foot mountain's peak -- achieving the unthinkable and completing the daring mountaineering feat.

The video of the final moments was shared by Purja online, which has since been watched over 627,000 times on Twitter.

Call Of The Black Pyramid

"No individual agendas, no individual greed but only solidarity and joint force of Team Nepal Flag of Nepal with a shared vision," Purja, a former elite British Army soldier of Nepalese origin, wrote while sharing the clip of the astonishing feat.

Brother to brother, shoulder to shoulder, we walked together to the summit whilst singing the Nepali national anthem. We all stopped around 10m before reaching the summit to huddle and make our final steps together as a team to mark this historical feat .. 1/4 #K2winter pic.twitter.com/P2kCwRy1Vn

"Super proud of all the team members for earning this for Nepal and humanity through hardship, selfless effort, and most importantly UNITY proving that Nothing is Impossible ! We are honoured to be sharing this moment with communities all across the world," he wrote, ecstatic about the achievement.

"Global warming and climate change is one of the biggest challenges the world is facing right now. The human race needs to unite to face era’s most threatening looming crisis. If we unite we can make anything possible !" he added.

Earlier this month, Purja had said on social media that all the lofty peaks above 8,000 metres had been scaled in winter by the international climbers and "it would be a great feat for the Nepalese climbing community to make history".