Deuba sprang a surprise on Sunday by seeking a vote of confidence in the reinstated lower House of Representatives and won it comfortably. 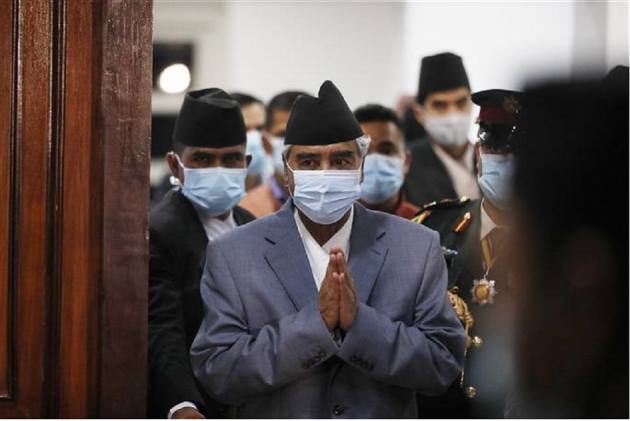 Deuba sprang a surprise on Sunday by seeking a vote of confidence in the reinstated lower House of Representatives and won it comfortably.

The 75-year-old President of the Nepali Congress who was appointed as the prime minister as per the Article 76(5) of the Constitution on July 12 following Supreme Court's intervention, secured 165 votes in the 275-member House.

A total of 136 votes were required for Deuba to win Parliament’s confidence. He had to seek a trust vote within one month after being appointed as prime minister. However, in a surprise move, he sought a vote of confidence on the first day of reinstated House.

Deuba’s failure to win the trust vote in the House would have lead to dissolution of the House and snap polls within six months in Nepal, which is facing an unprecedented health crisis due to the Covid-19 pandemic.

Sunday's outcome of the trust vote paves the way for Prime Minister Deuba to remain in office for next one and half year, until fresh parliamentary election is held, the Nepalese media reported.

As many as 249 lawmakers participated in the voting process and 83 of them voted against Deuba while one lawmaker remained neutral.

"I hereby declare that the motion of the vote of confidence tabled by Prime Minister Sher Bahadur Deuba has been endorsed with a majority,” House Speaker Agni Sapkota announced.

The proposal for the vote of trust was registered in the Parliament Secretariat on Sunday, the very first day of the session of the reinstated lower house.

"Congratulations Prime Minister @DeubaSherbdr and best wishes for a successful tenure. I look forward to working with you to further enhance our unique partnership in all sectors, and strengthen our deep-rooted people-to-people ties," Modi tweeted.

Deuba took the oath of office and secrecy for a record fifth time on July 13, a day after a five-member Constitutional Bench of the Supreme Court led by Chief Justice Cholendra Shumsher Rana reinstated the dissolved House of Representatives for the second time in five months.

President Bidya Devi Bhandari had dissolved the lower house for the second time in five months on May 22 at the recommendation of Prime Minister K P Sharma Oli and announced snap elections on November 12 and November 19.

Deuba had staked the claim to form the government as per the Article 76(5) with the support of 149 lawmakers but President Bhandari had invalidated the claim, along with that made by Oli saying both claims were insufficient.

After the apex court's intervention, President Bhandari had summoned the meeting of both the Houses of the Parliament on Sunday.

In the lower house of Parliament, the ruling Nepali Congress (NC) has 61 members while its coalition partner CPN (Maoist Center) has 48 members, excluding Speaker Sapkota.

The main Opposition CPN-UML, which is Oli's party, has 121 members in the lower house, the JSP has 32 members and the other three fringe parties have a member each. There is an independent lawmaker as well.

The Nepali Congress, CPN Maoist Centre and Janata Samajbadi Party-Nepal lawmakers voted in favour of Deuba. The Thakur-Mahato faction of the JSP-N also decided to support Deuba at the last minute.

Close to a dozen lawmakers of the UML left the House after Deuba's victory was certain. However, the remaining 22 lawmakers, including Madhav Kumar Nepal himself, voted for Deuba.

Former prime minister and senior leader of the Communist Party of Nepal (Unified Marxist–Leninist) Jhalanath Khanal, who is undergoing treatment at a hospital in New Delhi, had issued a statement, asking his party’s lawmakers to vote in favour of Deuba.

With his victory, Deuba is set to remain prime minister for a year and a half, until elections are held.

On February 23, the apex court reinstated the dissolved House of Representatives, in a setback to embattled Prime Minister Oli who was preparing for snap polls.