Nepal on Sunday plunged into a political crisis after PM Oli dissolved Parliament, amidst a prolonged power tussle between him and former premier Prachanda 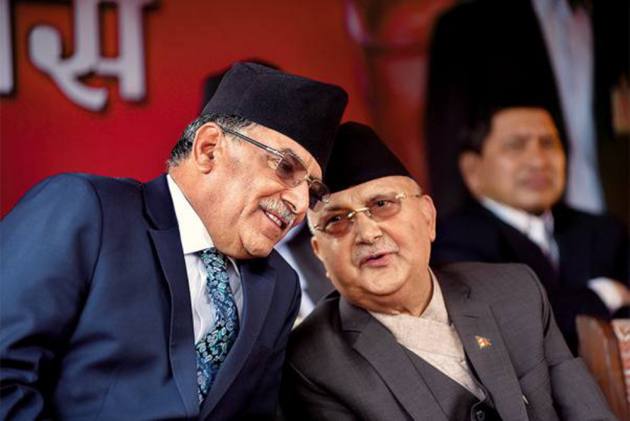 The 66-year-old leader was nominated by senior leader Madhav Kumar Nepal, who was earlier named as one of the two chairmen of the party, at a parliamentary party meeting of the Prachanda-led faction at the Parliament Building in New Baneshwar, My Republic reported.

Oli, 68, was removed from the post of party's chairman on Tuesday by a central committee consisting of members of the Prachanda-led faction. The committee also decided to take disciplinary action against him for dissolving the House of Representatives unconstitutionally.
Prachanda said that his first priority would be to restore the dissolved House of Representatives and form a new government. "I will unify all the democratic forces and political parties to keep the hard-won political system and parliament lively and functioning," he said.

He thanked lawmakers for electing him as the parliamentary leader and said that he has been handed over a huge responsibility during this challenging time.

Earlier in the day, the Supreme Court forwarded all the writ petitions against Prime Minister Oli’s move to dissolve Parliament to a Constitutional bench.

Chief Justice Cholendra SJB Rana’s single bench passed the order after a preliminary hearing on the 12 different writ petitions filed against the dissolution of the House of Representatives, the paper reported.

The Constitutional bench will start the hearing on Friday. The bench is led by Chief Justice Rana and will constitute of four other justices who will be picked by him.

Although the petitioners demanded an interim order against the decision, the apex court has refused to issue any such order.

Meanwhile, leaders of the Prachanda-led faction have told the Election Commission that they hold a two-thirds majority in the party and therefore they must be granted official recognition by the election body, the paper said. "We are here with the proof that we are the only legitimate Nepal Communist Party," Leela Mani Pokharel, a standing committee member of the party, was quoted as saying by the paper.

Pokharel said that their faction has a majority with official signatures of 315 central committee members of the party. To get official recognition from the EC, the faction should have majority members, full details and their signatures along with copies of citizenships.
Nepal on Sunday plunged into a political crisis after Prime Minister Oli got President Bidya Devi Bhandari to dissolve Parliament, a controversial move amidst a prolonged power tussle between him and former premier Prachanda within the ruling dispensation.

The move came after the intra-party feud reached climax in the ruling party which has been witnessing months long tussle between two factions, one led by Oli and another led by Prachanda.

The ruling party has now been virtually divided more than two years after it was formed following the merger of CPN-UML led by Oli and CPN-Maoist Centre led by Prachanda in May 2018.