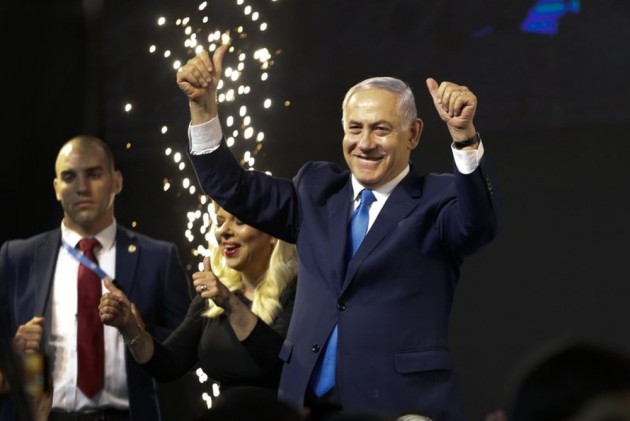 Israeli Prime Minister Benjamin Netanyahu has vowed to annex part of the occupied West Bank on the border with Jordan if he is voted back into office next week.

Netanyahu said he would apply "Israeli sovereignty over the Jordan Valley and northern Dead Sea", the BBC reported on Tuesday.

Such a move would be popular with right-wing parties which he would have to depend upon to form a coalition but fiercely opposed by Palestinians.

Israel has occupied the West Bank since 1967 but stopped short of annexation.

Netanyahu, who leads the right-wing Likud party, is campaigning ahead of general elections next Tuesday.

Polls suggest Likud is neck-and-neck with the opposition centrist Blue and White party and may struggle to form a governing coalition.

Palestinians claim the whole of the West Bank for a future independent state. Netanyahu has previously insisted that Israel would always retain a presence in the Jordan Valley for security purposes.

Israel occupied the West Bank, along with East Jerusalem, Gaza and the Syrian Golan Heights, in the 1967 Middle East war.

It effectively annexed East Jerusalem in 1980, and the Golan Heights in 1981, although neither move was accepted internationally for decades.

The Donald Trump administration has since recognised both steps, overturning previous US policy.

The fate of the West Bank goes to the heart of the Israel-Palestinian conflict. Israel has built about 140 settlements there and in East Jerusalem which are considered illegal under international law, though Israel disputes this.

More than 600,000 Jews live in the settlements, which the Palestinians want removed.

Meanwhile, Turkey has slammed as "racist" Netanyahu's controversial pledge to annex the Jordan Valley in the occupied West Bank if he is re-elected in September 17 polls.

"The election promise of Netanyahu, who is giving all kind of illegal, unlawful and aggressive messages before the election, is a racist apartheid state," Foreign Minister Mevlut Cavusoglu wrote on his official Twitter account in both English and Turkis on Tuesday.

"Will defend rights and interests of our Palestinian brothers&sisters till the end," he added.

The Turkish government regards itself as a champion of the Palestinian cause and has never shied away from criticism of Israel.

Even, Saudi Arabia on Wednesday condemned Netanyahu's controversial pledge as a "dangerous escalation".

"The kingdom affirms that this declaration is a very dangerous escalation against the Palestinian people and represents a flagrant violation of the UN charter and the principles of international law."

Saudi Arabia also called for an "emergency meeting" of the foreign ministers of the 57 member states of the Organisation of Islamic Cooperation (OIC), the SPA added.