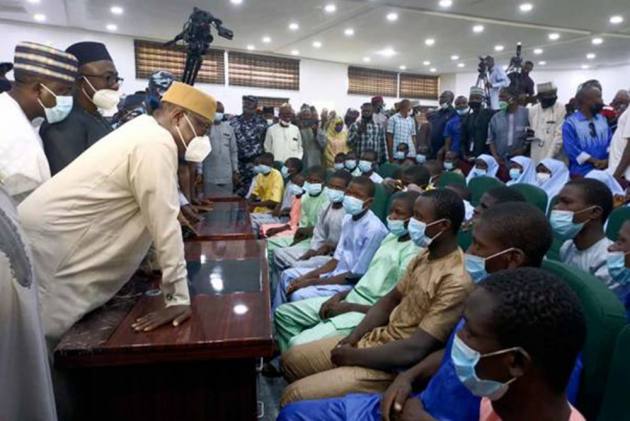 Gunmen attacked a school in northwestern Nigeria and kidnapped 39 students just weeks after a similar mass abduction in the region, authorities said Friday.

"The number of missing students is now confirmed to be 39, comprising 23 females and 16 males," said Samuel Aruwan, Commissioner for Kaduna State Ministry of Internal Security and Home Affairs, said in a statement. Several school staff were also kidnapped, he added.

Aruwan said the attack was carried out by a large group of "armed bandits," adding that the military engaged the attackers and were able to take 180 staff and students to safety.

An unspecified number of the students were injured and are receiving medical attention at a military facility. Security forces "are conducting an operation to track the missing students," Aruwan said.

UN Secretary-General Antonio Guterres strongly condemned the abduction and called for "the immediate and unconditional release of those students that remain in captivity," UN spokesman Stephane Dujarric said.

The UN chief urged authorities to ensure that schools "remain a safe space for children to learn without fear of violence or kidnapping or any other attacks on them," Dujarric said.

Nigerian authorities also said that these "bandits" were behind the earlier abduction of 279 schoolgirls late last month in the northwest, referring to the groups of armed men who kidnap for money or to press for the release of jailed members of their groups.

In last month’s incident hundreds of Nigerian schoolgirls were abducted from a boarding school in the country’s northwestern Zamfara state. The Government Secondary Jangebe School in Zamfara state reported as many as 300 girls missing. However, days after the abduction, 279 of the abducted girls were released.

At the time of the attack, one resident told AP that the gunmen also attacked a nearby military camp and checkpoint, preventing soldiers from responding to the mass abduction at the school.

Police and the military had since been carrying out joint operations to rescue the girls, whose abduction caused international outrage.

Nigeria has seen several such attacks and kidnappings in recent years. On Saturday, 24 students, six staff and eight relatives were released after being abducted on February 17 from the Government Science College Kagara in Niger state.

In December, more than 300 schoolboys from a secondary school in Kankara, in northwestern Nigeria, were taken and later released. The government has said no ransom was paid for the students' release.

The most notorious kidnapping was in April 2014, when 276 girls were abducted by the jihadist rebels of Boko Haram from the secondary school in Chibok in Borno state. More than 100 of those girls are still missing. Boko Haram is opposed to western education and its fighters often target schools.

Other organized armed groups, locally called bandits, often abduct students for money. The government says large groups of armed men in Zamfara state are known to kidnap for money and to press for the release of their members held in jail.

Experts say if the kidnappings continue to go unpunished, they may continue.

Nigerian President Muhammadu Buhari said last week the government would not “succumb to blackmail by bandits and criminals who target innocent school students in expectation of huge ransom payments.” He called on state governments to review their policy of making payments, in money or vehicles, to bandits, saying such a policy has the potential to backfire.