Expressing shock at the "horrific" attack in the Perm State University in Russia, the Indian embassy also offered its deep condolences for the loss of lives in the shooting at the state university. 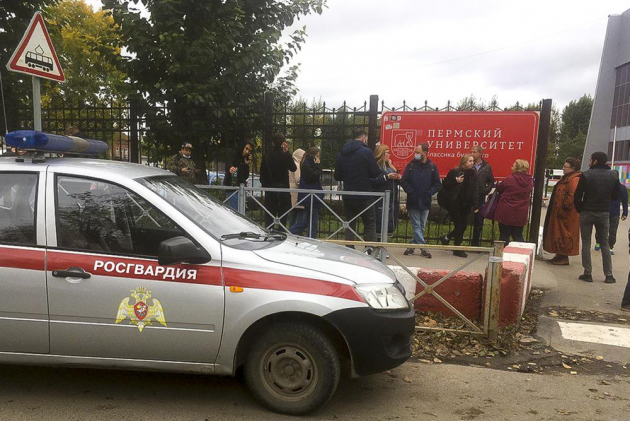 All Indian students studying at Russia's Perm medical university, where at least eight people were killed in a shooting incident on Monday, are safe, the Indian Embassy here has said.

Expressing shock at the "horrific" attack, the embassy also offered its deep condolences for the loss of lives in the shooting at the state university.

"Shocked at horrific attack at Perm State University in Russia; our deep condolences for the loss of life and best wishes for early recovery of those injured," the Indian Embassy in Russia tweeted.

"Embassy is in touch with local authorities and representatives of Indian students. All Indian students at Perm State Medical University are safe," it said.

At least eight people were killed and 24 injured in the shooting, Russia’s state-affiliated news service Sputnik reported, citing the latest data provided by the Russian Ministry of Health.

Russian President Vladimir Putin deeply condoled with the relatives of the victims of Monday's shooting at the university in Perm, the report quoted Kremlin spokesman Dmitry Peskov as saying.

The president was informed about what happened in Perm, at the university. He instructed Prime Minister [Mikhail] Mishustin to send the ministers of education and health to Perm to organize assistance to the victims and relatives of those killed in the tragedy," Peskov said.

According to the Russian Investigative Committee, a student opened fire when he entered the territory of one of the university campus buildings. The shooter was apprehended and identified. A criminal case was launched on the count of a murder of two or more people, Russian news agency Tass reported.

Students and staff at the varsity locked themselves in rooms during the attack while videos posted on Russian news sites showed some students jumping out of second-story windows, according to a media report.

The university, which has 12,000 students enrolled, said about 3,000 people were on the campus at the time of the attack. The varsity is in the city of Perm, which is about 1,100 kilometers east of Moscow with a population of about 1 million, it said.