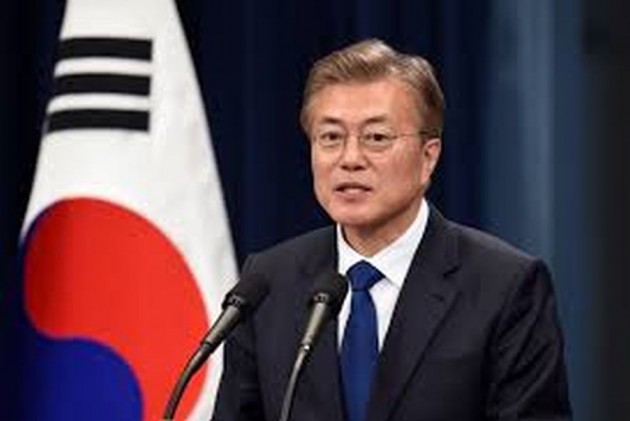 "Corresponding measures must be devised in order to facilitate North Korea's continued denuclearisation efforts," he added, such as the US agreeing a "peace regime" and formally declaring an end to the 1950-53 Korean War.

Moon acknowledged that the agreement North Korean leader Kim Jong Un and US President Donald Trump signed at their first summit in Singapore was "somewhat vague".

He also said there was "scepticism" that Kim's "concept of denuclearisation" will be different from that demanded by the US.

"But Kim has assured many foreign leaders, including myself, Trump, Xi Jinping and Putin, that his concept is no different in any way from what the international community demands," Moon told reporters at the Blue House in Seoul.

"Kim also stated that denuclearisation and the issue of ending the war has nothing to do with the status of US troops in South Korea," he added.

"Kim Jong Un understands that the issue is entirely up to the decision of South Korea and the United States."

US strategic assets in the region involved not only North Korea, "but also overall stability and peace in Northeast Asia", Moon said.

"I don't think it will be discussed in North-US nuclear talks."

The North Korean leader's trip to China this week was a sign a second Trump-Kim summit was "imminent", he added.

"I think Chairman Kim Jong Un's visit to China will have a very positive effect on the success of the second US-North Korea summit," he told the press conference.

A second summit should produce an agreement that was "more clear on actions by each side", he added.

Moon has actively pursued engagement with the North to bring it to the negotiating table, a stance that has at times seen Seoul and Washington take increasingly divergent approaches.

Conditions for resuming two key economic projects between North and South Korea -- the Kaesong Industrial Complex, where Southern companies used to employ North Korean workers, and Southern tourism to Mount Kumgang in the North "have essentially been met already", he said.

But many analysts say that restarting the schemes would at present violate sanctions imposed on the North over its nuclear and ballistic missile programmes.

Seoul would cooperate with the US and international community to seek to "resolve" the issue of sanctions "as soon as possible", Moon said.