Omicron Covid-19 Variant: France has also sharply restricted travel to the country from outside the European Union, including from the UK, because of the spread of the new variant. 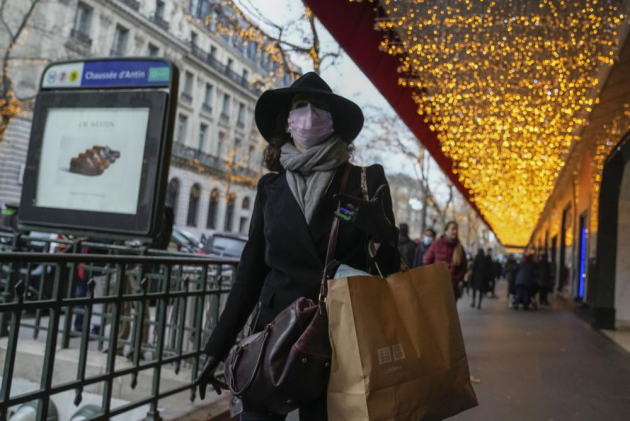 French authorities on Friday urged people to get vaccinated against the coronavirus ahead of the holiday festivities as infections surge and the government tries to avoid another lockdown.

“The fifth wave is here and it is here in full force,” Prime Minister Jean Castex told a news conference, adding that the fast-spreading omicron variant is expected to dominate infections in France at the start of January.

To curb the spread of the virus during the holidays, the government banned public concerts and fireworks displays at New Year's celebrations and called on people to avoid large gatherings and limit the number of family members congregating at Christmas.

“The fewer you are, the lower the risk,” Castex said.

France has also sharply restricted travel to the country from outside the European Union, including from the U.K., because of the spread of the omicron variant. Authorities announced limits on reasons for traveling to France from Britain, a negative virus test less than 24 hours old and a mandatory 48-hour isolation upon arrival beginning Saturday.

In France, authorities have accelerated vaccinations, including a massive push to administer as many booster shoots as possible before families gather for Christmas. Health officials narrowed the gap between the second and third shot to four months from the previous five, Castex said.

The National Velodrome in Paris, the home of France's track cycling team and now once again the country's largest vaccination center, was buzzing with people getting jabs before heading home — or doing last minute shopping — for the holidays.

With a daily average of 50,704 infections over the last week and 60,866 on Thursday alone, people said they are not willing to risk their health and take chances on the safety of their loved ones.

“It's to be safe,” said Nilo Schwencke, a doctoral student.

Before coming on Friday to get a booster, Coralie Vieville said she has shared a file with 40 family members, expected to gather for Christmas, to determine who has already been vaccinated and who hasn't.

“That's how we are preparing,” Vieville said. Because it's a large family, she said, "it's quite important to do this and be sure there's as little risk as possible.”

Over 48 million of France's 67 million people are fully vaccinated and tens of thousands are signing up for first shots or boosters. It's those third shots that health officials want to administer fast and in large numbers to curb the fast-spreading omicron variant.

“People often forget and say 'I'm vaccinated, I've caught Covid-19, the vaccination's not working,” said Marc Morales, a doctor at the Velodrome, as recreational cyclists sped round the track. “That's false. It protects against severe cases, it reduces transmission but in terms of transmission it's not 100% efficient.”

The velodrome can accommodate on average three to five thousand vaccine shots in a six-hour day but if needed, can take even more, Morales said. Next week, the “vaccinodrome,” as it has become known, will start vaccinating children aged 5-11 after health authorities issue the final approval. (AP)